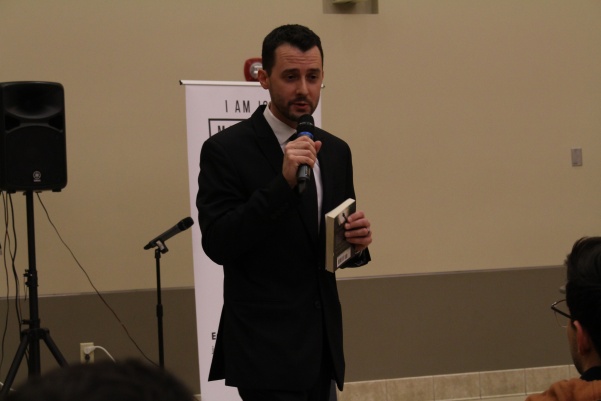 The mentalist correctly guessed the answer to every question Friday night at Evans Commons.

Hosted by the Campus Activities Board, the mentalist, Josh Fletcher, provided an hourlong performance engaging the student audience.

The audience was as much a part of the performance as the mentalist was.

Fletcher used props such as cards and books. He would hand them out and then attempt to guess what card or word the audience member was thinking of.

Fletcher at one point called an audience member up to the front. They both took a pen and a notepad and started to draw back-to-back, so neither could see what the other was drawing.

When they finished, Fletcher instructed the students to switch notepads without the audience seeing and cap their markers.

“Is your marker capped?” Fletcher said “Learn from my experience; I’ve ruined a lot of good clothes that way.”

They turned their notepads around to show the audience they had both drawn a flower.

The audience gasped and laughed at Fletcher’s skills as a mentalist.

Katelyn Marshall, a member of the campus activities board, said, “I like that kind of surprise shock, like ‘There’s no way he got that answer!’”

One student, Alex Stuchell, said he enjoyed the performance.

Fletcher graduated with a bachelor’s in music education from Northern Kentucky University.

He said he gravitated toward his profession as a mentalist because he found it interesting.

“I started diving in to find out what was really possible, and where is the fact and the fiction,” Fletcher said.

Fletcher also said he enjoyed his experience at Lindenwood.

“It’s a beautiful university, and I genuinely mean that,” Fletcher said.