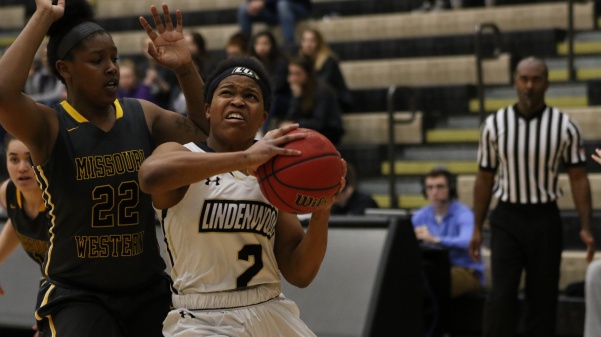 Guard Charisse Williams, No. 2, drives to the basket in the Lions' 61-50 win against Missouri Western Saturday afternoon.
Photo by Kyle Rhine

Lindenwood held a 41-30 lead at halftime as both teams shot a low percentage from the field. The Griffons shot 38.1 percent and the Lions shot 41.4 percent in the first half.

Missouri Western played the Lions closer in the second half as Lindenwood outscored the Griffons 31-30 en route to the 16th win of season.

Lindenwood out-rebounded the Griffons 34-28 and the bench contributed for 35 points while Missouri Western only had eight points from the bench.

”It was a great win for our seniors and an even better win to end regular season play,” forward Kallie Bildner said. “We have to carry that energy over to tomorrow’s game.”

Following the win, Lindenwood finished the regular season 16-12 and 8-11 in the MIAA conference. The Lions tied for eighth place in the conference with Missouri Southern who holds the tiebreaker.

Lindenwood will travel to Joplin, Missouri, to face off against Missouri Southern at 7 p.m. Monday, Feb. 26 for the first-round matchup of the MIAA tournament.