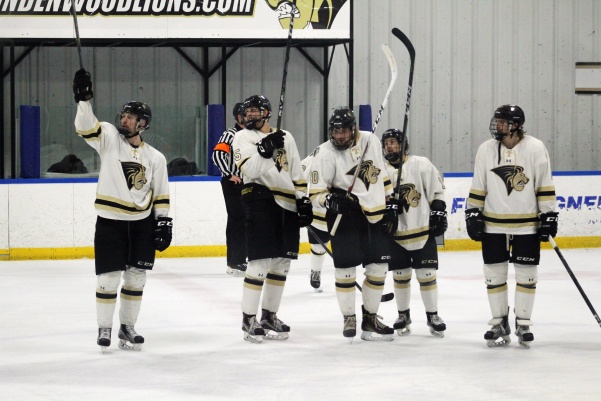 The D1 men’s ice hockey team won the Central States Collegiate Hockey League conference tournament championship Feb. 25 at the Bird Arena in Athens, Ohio. The No. 1 Lions faced Iowa State and the University of Illinois to capture the title.

After Cyclone’s player Tony Uglem scored in the first period, freshman forward Zach Mitchell rallied to score twice in the third period for the win.

Saturday, Feb. 25, freshman goalie Cooper Seedott stopped 27 of 28 shots to secure the Lions’ 4-1 victory over the University of Illinois.

“I think it’s something special to be proud of, but it isn’t our end goal; the end goal is winning nationals,” Greene said. “Our game plan doesn’t change from the weekend; the whole team is taking pride in the details of the game, and it’s showing on the scoreboard.”

At the Wentzville Ice Arena, the D2 Lions won both of their playoff games against Minnesota Duluth and Marian University.

Friday, Feb. 24, it took two overtimes before the Lions got their 3-2 win against the Minnesota Duluth hockey team.

Michael Schrader scored first to lead the Lions 1-0 after the first period. Christoffer Lowenhielm scored in the second period to add to the Lions’ lead before Minnesota tied the game with eight minutes left in the third period.

One sudden-death 20 minute overtime period was not enough for the Lions as they were still tied 2-2. Nick Schnelle ended the second overtime with a goal for their 3-2 victory over Minnesota.

The Lions beat the No. 5 Marian Sabres in the regional finals on Feb. 25 in their 7-1 victory.

Nick Elliott scored twice and Van Wyk added a shorthanded goal to make it 3-0 in the first period. Jack Anderholm, Nick Schnelle, Jake Wynd and Josh Laven all scored in the game. The Sabres scored a goal late in the third period to take away the Lions’ shutout.

Both the D1 and D2 Lions travel to Columbus, Ohio, for the American Collegiate Hockey Association national championship tournament March 8-15.