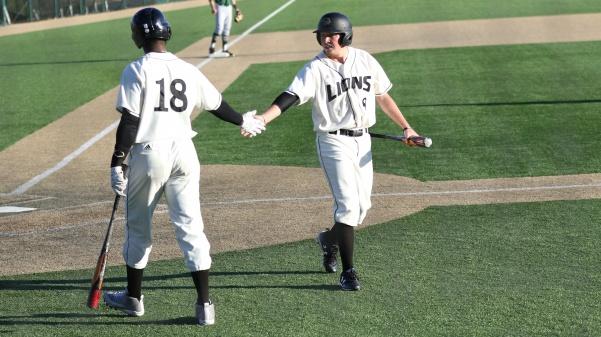 Infielder Jackson Fuller, No. 8, scores first Lions' run of game and high-fives teammate D.J. Miller, No. 18, in the Lions' 5-2 loss on Sunday.
Photo by Kyle Rhine

The Lindenwood baseball team split the doubleheader on Sunday against Northeastern State. The Lions won 8-7 in the first game on a walk-off single off the bat of Drew Quinones, but fell 5-2 in the second game as the Lions left 12 runners on base.

In the ninth inning with the bases loaded and only one out, third baseman Quinones singled to left, scoring Rayce Singbush for the game-winning run.

Following the win, Lindenwood would fall in game two against Northeastern 5-2 as the Lions failed to cash in on many opportunities.

Lindenwood had a key opportunity in the first inning with two runners on and only one out, but a strikeout and a groundout ended the inning.

The Lions trailed 4-0 in the sixth, but got on the board on a sacrifice fly off the bat of Wes Degener, scoring Jackson Fuller to make it 4-1.

In the seventh inning, Nelson grounded out to first, scoring Quinones, cutting the RiverHawks’ lead to 4-2.

Lindenwood failed to score any more runs as the Lions went on to lose their first home game of the season.

Following the loss, the 9-4 Lions will begin a three game series against the 8-4 Pittsburg State Gorillas starting at 2 p.m. March 2 in Pittsburg, Kansas.