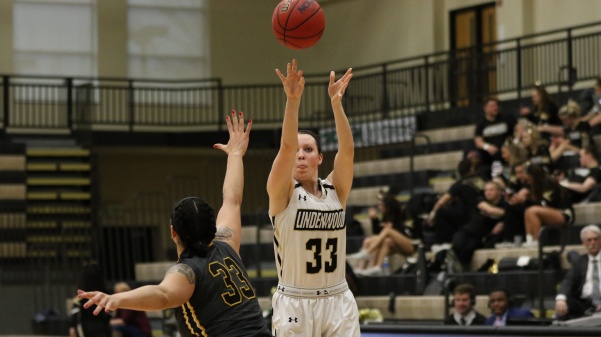 Forward Lexie Moe, No. 33, attempts a three pointer in Lions' 61-50 win against Missouri Western on Feb. 24 at Hyland Arena.
Photo by Kyle Rhine

The Lions led Missouri Southern 38-31 at halftime as Lindenwood shot 7-7 from the free throw line and 41.9 percent from the field.

Guard Lindsay Medlen scored a season high 24 points in the win. Medlen shot 6-15 from the field and 9-10 from the free-throw line, while forward Kallie Bildner recorded her 17th double-double of the season scoring 13 points and grabbing 14 rebounds.

Following the win, Lindenwood will advance to play top-seeded Central Missouri at 6 p.m. on Thursday, March 1, in Kansas City, Missouri.

“This team has a fight in them; we won’t accept anything less than what we want,” forward Kallie Bilder said. “Central Missouri will be tough, but no doubt in my mind that we can pull it off and win this whole thing.”