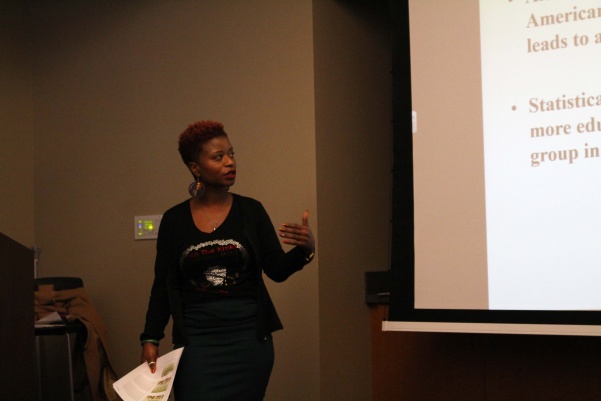 Whitney Mathison presented a talk on African Americans mental health in the modern technological age on Wednesday, at 4 p.m. in Evans Commons.
Photo by Abby Stone

Whitney Mathison, Director of the Counseling and Resource Center, spoke about African-Americans and mental health in the modern technological age.

She started the talk by handing out two papers. One said “Your body hears everything your mind says, stay positive.” The other had a list of examples of racial microaggressions in therapeutic practice.

Mathison’s presentation prominently included discussion between the audience and herself.

Mathison said many African-Americans perceive mental illness to be a weakness, but that they are twenty percent more likely to experience a mental health issue than the general public. Many are also misdiagnosed, Mathison said; many students are diagnosed with ADHD, when in reality it is trauma.

“We know a lot more about trauma now.” Mathison said. “Still, African-Americans are not as likely to be diagnosed with trauma as other people.”

Toward the end, Mathison set up a trivia game for the audience to participate in. The trivia included many questions about racial inequalities in the St. Louis area.

Mathison concluded with a call to action, saying the public could attend student programs to build relationships.

“Do something to dismantle oppression,” Mathison said. “If you write policies, do that. If you do art, do that. Whatever you do, do it.”