From Lindenwood to Hollywood 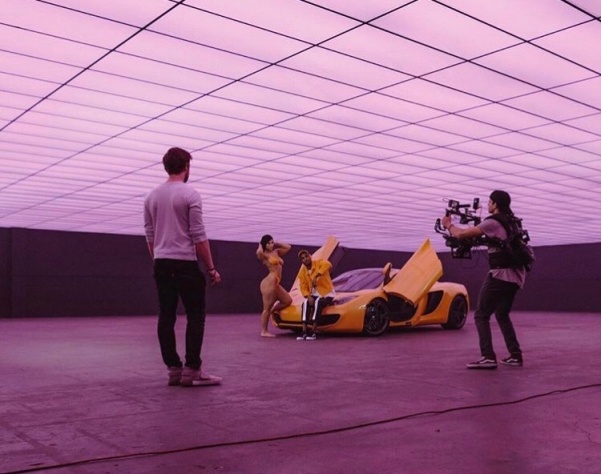 Julius Damenz and Matias Wajner working behind the scenes of “Schemin” by Jazz Lazr in 2018.
Photo by Cooper Janusevskis

Former Lindenwood student Julius Damenz and current student Matias Wajner ended up in Hollywood the same weekend in 2016. Wajner was giddy with the prospect of being part of a Showtime series. Damenz was ready to start a highly competitive internship on the set of “Scream Queens.”

Both spent a year and a half in Los Angeles pursuing careers in cinematography, successfully rising to top productions in the music video industry. Damenz and Wajner worked on the camera team with rappers such as Migos, Gucci Mane, Playboi Carti, 2-Chainz, Rich the Kid, G-Eazy and Post Malone.

Damenz said “all roads” lead to LA for his career.

He graduated from Lindenwood in 2016 with a degree in cinema arts. As a student, Damenz won a college Emmy for his senior short film “Infinite” and the Emmys’ summer internship program offered him a position. Damenz said it was a rare opportunity, because he was chosen from a couple hundred students to shadow a cinematographer. At the historic Paramount Studios, Damenz met Joaquin Sedillo, recognized for his camera work on “The Italian Job,” “Memento” and “Glee.”

“There was never any expectation; I was just there to shadow and learn, and that was liberating in a sense,” he said.

Damenz said shooting “Scream Queens” at Paramount Studios was “surreal” because he walked through the famous iron gates every day, scanning a badge with his picture and name on it. He said he remembers walking through the sound stages, reading plaques that listed all the noted TV shows and films shot on the sets.

Since Damenz is from Germany, he did not recognize actors John Stamos and Emma Roberts, but he did know who Jamie Lee Curtis, well known for “Freaky Friday,” was.

“I introduced myself to her, and she actually remembered my name,” he said. “So every morning she would be like ‘Oh, hey Julius.’”

Damenz said he had no idea how big the scale of TV productions were; he recalls Paramount employing hundreds of people and building million-dollar sets for TV shows.

Wajner, like Damenz, got lucky with a job opportunity in LA. Wajner’s aunt, Christina Wayne, was an executive producer for “I’m Dying Up Here,” a show about the stand-up comedy scene in LA during the 1970s. He was offered a paid production assistant job for the summer. Wajner enjoyed it so much, he asked to stay for the rest of the season’s production, putting his degree on hold for a year.

“[At first] I tried to find out what everyone did, help them out and be super nice, and then I realized everyone is just a human just like you, and if you treat everyone the same … you’ll be fine,” he said.

Lindenwood graduate Chloe Williams, who was roommates with Damenz in LA, said both of the men’s situations were unique because they had jobs and places to stay prior to coming to the city, unlike most people who come without a secure job.

Damenz said freelancing made him take responsibility for his future and pushed him to find jobs not only to gain experience but to pay rent.

“For the first time, I didn’t have this pre-established structure on my life, like school or the internship,” he said.

One night, during the end of Damenz’s internship, a “random guy” he followed posted that he was looking for someone to shoot behind the scenes for a music video. Damenz messaged him, not ex- pecting a reply because the man had 150,000 followers. Surprisingly, he offered Damenz the job. He told Damenz to come to the set at 7 a.m. Saturday.

“I got home at 3 a.m. on Friday night … and there was this really cool moment where I was like, ‘Aw, do I really want to go to this, it’s unpaid, it’s probably going to be a lot of work,’” he said. “And then I decided to go, and that’s where I met Darren Miller.” Miller has been the director of photography for Migos, Chris Brown, 2 Chainz and G-Eazy music videos.

After more jobs, Miller moved Damenz up to a second unit cameraman, then first camera assistant.

When Miller needed a second camera assistant, Damenz recommended Wajner, and he was hired to shoot behind the scenes.

Damenz, who is used to working on narrative films, said music videos were a shift for him in the creative process because they are shot in a day and generally “a mess.”

“If it takes 20 hours to get done, it’ll take 20 hours,” he said. “So it’s a little crazy sometimes. We did this one music video [‘T-shirt’ by Migos] where we shot at Lake Tahoe in the snow. Nuts. We’re all freezing, standing in like a snowstorm.”

Damenz said even though music videos are given less time for planning and pre-production, they are fun to experiment with color and surreal elements.

“That’s the beauty of music videos; it doesn’t have to be a cohesive story,” he said. “Still some story aspect, but it’s not like if you don’t get this one shot, then it doesn’t make sense.”

Damenz said Wajner has a good sense of movement and is talented at finding the right angles in difficult locations.

“[Wajner] knows exactly where to put the camera, and he makes people look really good — like rock stars,” he said.

Similar to actors and actresses he met, Damenz had not heard of most of the artists he worked with in LA, contrary to people who he said came in only to meet the artists on jobs.

“I had no idea who Migos or Post Malone was when we shot them,” he said. “I think people respected that because I was in it for the craft and my passion for it and not to meet famous people.”

“When everyone’s out partying, he’s studying film or writing,” Wajner said. “He just makes the right decisions, and he is an extremely hard worker. While I pass out, he’s writing.”

Networking took a lot of effort, and Damenz said the industry can seem cliquey sometimes, because people like working with the same people. But networking was also about genuine friendships, not just LinkedIn connections to Damenz.

In LA neither man sent a single résumé for a job he was hired for.

“You get jobs through friends of friends, which establishes respect, which I guess is what a résumé does in normal jobs,” Damenz said.
Instagram played a huge role in launching connections for both Damenz and Wajner in LA.

During their time in LA, both men made schedules for posting on Instagram.

“As a freelancer, you are promoting not a business, not a product, but yourself,” Damenz said.

But even though California is picture-perfect, with sunny weather and beach bodies, both men experienced challenges in LA.

The biggest challenges of freelancing were maintaining a steady stream of work, consistently networking, the high cost of living in California and distance from family.

“I drove my car out there, I was so excited,” Wajner said. “The problem was I was so young and blindfolded, just like ‘Yeah, it’s going to be great!’ I was excited to come back to school, just to be a kid again.”

Wajner came back to enroll at Lindenwood last semester, in 2017, to finish his undergraduate.

Carlos said he recommends students network with Damenz and Wajner to get real-world experience.

Both men are currently living in St. Louis and are continuing to fly out to LA to work on music videos. Wajner is juggling both school and a growing network.

“Yes we got to shoot with a lot of people … yes my portfolio is a lot better than it was a year ago; I had zero names and now I have a lot of big names, but it’s still a growing process,” Wajner said. “I’m still a nobody.”