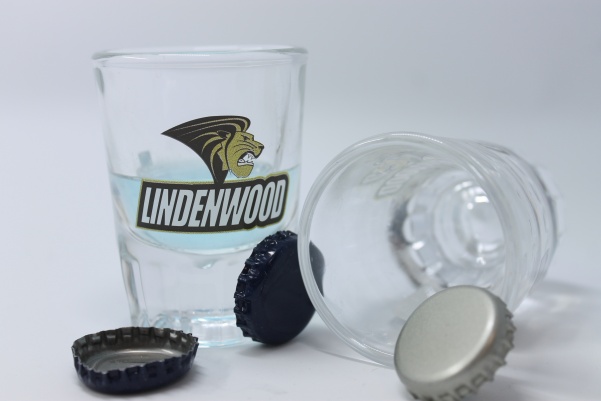 These shot glasses are currently available for purchase in our school book store, yet they are illegal to have on campus. photo by Lindsey Fiala

Lindenwood is starting to shake its conservative roots. Next semester, the university that was founded by George and Mary Sibley — two strict Presbyterians — will become significantly more progressive.

Lindenwood will offer coed housing in Rauch and Calvert Rogers halls, 24/7 visitation in nontraditional housing and allow fraternities to share a “frat house.”

In an interview with Legacy magazine in January, President Michael Shonrock hinted at what could be the next step — allowing alcohol on campus.

Shonrock said administrators and Pedestal Foods are exploring the idea of selling glasses of wine during intermissions of shows at the J. Scheidegger Center for the Arts.

While Shonrock offered no timetable for the change, he said to sell drinks, Pedestal Foods first would need to get a liquor license, and the university’s board would have to give permission.

Shonrock added that no plans currently are underway to introduce alcohol at other events.

According to Paul Huffman, university archivist, Lindenwood has always officially been a dry campus.

“When [the Sibleys] decided to retire from running the school, they deeded Lindenwood over to the Presbyterian Church,” Huffman said.

“Knowing that not all Presbyterians were against drinking, the Sibleys added a clause to the deeding over of the school that said that there should be no form of drinking or gambling on campus.”

But in the late 1970s, Lindenwood’s administration turned a blind eye to a couple of unofficial bars set up in dorms, according to Huffman. The legal drinking age in the United States was 18 at the time; it wasn’t raised to 21 until 1984.

Associate English professor Hollis Heyn was a student from 1971 to 1975. During that time, President John Anthony Brown established a separate college for men because Lindenwood was originally established as a “female college” in the Sibleys’ deed.  According to Heyn, the men’s and women’s colleges had separate deans, and Patrick Delaney, known as “Coach” by students, was much more relaxed with the men.

“It was a free-for-all with the men; they had no rules whatsoever,” she said.

Heyn said Irwin, a male dorm at the time, had parties a lot.

According to Heyn, the dormitories substituted for fraternities and sororities back then. For the parties, the men would have “bathtub sangria,” in which they clogged the bathtub and added alcohol and fruit.

“It was very gross,” said Heyn, who never tried the concoction herself.

Where Scheidegger is situated now is the former location of a liquor store called Lucky’s, which sold both ammunition and liquor. According to Heyn, students would walk to the store to buy alcohol.

Director of Student and Academic Support Services Penny Bryant came to Lindenwood as a student in 1980. Bryant said there were “no rules” and the president, Robert Johns, was very relaxed about alcohol.

“I remember the first year I was here, when Dr. Johns was still here, the campus was incredible,” she said. “We had first-run movies, we had parties all the time. It was like wow.”

In August 1982, Johns was fired by the Board of Directors because of mismanagement, and the board had “his belongings removed from the house and put out to the curb,” Huffman said. Spainhower replaced him in January 1983.

Bryant said the students did not set out to get “totally schnockered” on the weekends but enjoyed parties in Ayres dining hall frequently.

“We did as we pleased,” she said. “I didn’t think about it as having this freedom; it was just the way it was.”

But partying was never the focus of college to Bryant and Heyn; both agree that the tight-knit community and serene campus made their college experiences.

“Besides the birth of my children, those were some of the best years of my life,” Bryant said.

Associate professor of mass communications Richard Reighard, who has been teaching at Lindenwood since 1985, said at the time, as long as students caused no problems, the administration had no problem with them drinking. Reighard said he often would have the entire communications program, only 20 students, over at his house.

“You regularly went to professors’ houses for cocktail parties,” he said. “There was much more socialization that went on, and it was all organic.”

Reighard said he watched out for his students and sometimes got phone calls in the middle of the night to help a student who partied too much.

“Some folks would come staggering back to the dorm, and they obviously came back three sheets to the wind, and you’d help them back to their dorm room and tuck them back in bed so they didn’t do something stupid or hurt themselves,” he said.

Reighard said he never went to Spanky’s Tap himself but did attend a few all-night poker games in Niccolls Hall in the ’80s.

However, a front-page story in the February 1985 edition of LindenWorld, the student publication at the time, questioned whether drinking was a problem on campus. While students didn’t come to a consensus, the dean of college life said implementing an alcohol education program was a priority.

When Dennis Spellmann took over as president in 1990, the campus became dry again.

“It was also around this time that Lindenwood became more socially conservative, which put the final nail in the coffin of a wet campus,” Huffman said.

But Huffman has said that the deed is considered more of a “historical document” than a current reference for the board of directors.

As for the future of alcohol on campus, Reighard and Heyn agree that allowing alcohol on campus would not encourage students to stay on campus during the weekends, because that’s not Lindenwood’s culture. Reighard said he doesn’t think allowing alcohol at sporting events would increase game attendance because Lindenwood is situated in a very populated spot with a lot of nightlife around.

In a study by Harvard’s School of Public Health, which surveyed more than 50,000 students at 120 colleges from 1993 to 2001, researchers found that a third of all American campuses are dry.

According to a study done by Partners in Prevention in 2017, 76 percent of all Missouri college students reported alcohol use in the past year, and 63 percent reported using in the last month.

Here’s how the policy works at Maryville: Alcohol can be consumed by anyone 21 years and older in the privacy of university living areas and at registered or university-sanctioned events when hosted by their liquor license holder or designee.

Students at Maryville are not allowed to consume alcohol in public anywhere on campus without working with one of the school’s third-party liquor license holders or designees.

Use of devices designed or intended for rapid alcohol consumption, including funnels and beer bongs, are prohibited.

Behavior that is intended to intoxicate, including races, games and beer pong, are also banned. These acts are considered aggravating circumstances.

The following are some sanctions that Maryville can take in the event of a violation: formal reprimand, community service, education or referral for counseling, restitution, university housing transfer or removal, suspension from specific courses or activities and suspension or expulsion from the university.

According to Director of Health and Wellness at Maryville Pam Culliton, the vast majority of Maryville students do not use alcohol in a risky manner.

“We [also] retain the option to contact parents if a violation of policy has occurred,” she said. “We do not impose ‘fines’ as part of the penalty.”

Maryville resident Taylor Wucher does not believe alcohol being allowed on campus causes any problems or interferences with school.

“I haven’t heard of any accidents or injuries [because of alcohol],” she said. “Our campus is small, so everyone just walks to parties.”

According to Culliton, Maryville has always been a “wet” campus. The only time alcohol is sold on campus is during specific events where a cash bar is set up and managed by its food- service provider.

Ninety-three percent of Lindenwood students who responded to a Legacy magazine staff survey are in favor of the university allowing alcohol consumption on campus.

The poll, conducted online through surveymonkey.com and through paper handouts, involved 577 Lindenwood students. Ninety percent of the respondents indicated they are residents.

Students who completed the survey ranged from freshman to graduate student status.  The survey included six questions and had a 4 percent margin of error.

More than 400 students who took the survey also provided additional comments about their opinions.

Freshman Joseph Schnapp believes there would be several positive impacts on Lindenwood if alcohol were allowed on campus.

“Firstly, students will be more likely to call for help if a colleague potentially has alcohol poisoning,” Schnapp said.

“Right now there is a fear that if someone were to call security, they too could get in trouble.”

Schnapp believes the second benefit would be the revenue Lindenwood could make if it sold alcohol at various sporting events.

“Third, enrollment will go up,” he said. “High schoolers want to go to a college where they can have fun. When a student sees that Lindenwood is a wet campus, the school is going to look better in that student’s eyes, and they will be more likely to pick it.”

Sophomore Ben Kraus said students currently go to extreme lengths to hide alcohol from the school, and it puts them in dangerous situations in order to drink.

“During these extremes, [students] get hurt,” Kraus said.

“Some [students] have to go to Main Street to drink to avoid getting in trouble on campus. This can lead to overconsumption if not watched by friends, or drunk driving back to campus.”

“If Lindenwood were to allow alcohol, those students wouldn’t need to try and find creative ways and would possibly just forget about it,” Martin said. “It might also put less strain on both campus and St. Charles police with no need to come by and confiscate the alcohol.”

Though many students are in favor of allowing alcohol on campus, several students think Lindenwood should keep its dry campus policy.

“If we keep getting rid of the traditions that make Lindenwood special, it will become a whatever university,” he said.

Another senior, Ashley Holdmeier, said she believes alcohol on campus could lead to more harassment and violence.

“I feel safe when I am on campus because I know I am away from the partying,” Holdmeier said. “I would like to continue to feel safe on campus.”

While opinions on the topic vary from one student to the next, Lindenwood is continually making changes for its students. And with alcohol showing up in its past, the idea of quenching students’ thirsts may be a possibility.