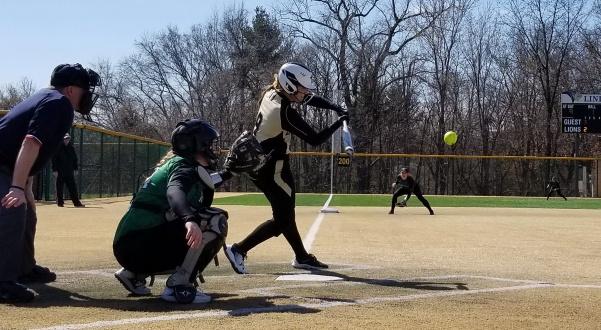 Lindenwood University’s softball team won two of three games during a series this weekend against the University of Wisconsin-Parkside. All games were played at the Lou Brock Sports Complex in St. Charles.

On Saturday, the teams played a doubleheader with the first game starting at noon. Game one started with a scoreless first inning followed by a dominating inning for Wisconsin-Parkside, scoring five runs against Lindenwood’s one run. Both teams scored four in the third followed by a scoreless fourth and fifth inning. Wisconsin scored one in the sixth and Lindenwood scored two in the seventh. This would be the only win for the Wisconsin-Parkside Rangers with the final score being 10-7.

Game two started at 1:45 p.m. that Saturday with two runs from the Rangers and three runs from the Lions in the first. The second and third innings were scoreless for both teams, but Wisconsin broke the scoreless streak with a run in the fourth. In the fifth inning, Wisconsin scored for the last time this game and Lindenwood scored two. The Lions were able to score another run in the sixth and held Wisconsin at four runs for the remainder of the game. Lindenwood came out on top with a final score of 6-4.

The teams faced for the final time on Sunday at noon. The Rangers started off strong with a three runs in the first over Lindenwood’s two. The second inning brought a single run in for both teams. Wisconsin sat at four runs and Lindenwood at three for the third and fourth inning until the Lions made a comeback in the fifth with three runs. The Lions followed up with another three runs in the sixth and didn’t allow the Rangers to score for the remainder of the game. Lindenwood closed out the weekend with a 9-4 win.

Following this weekend’s series, the Lions sit at a record of 6-6 on the season. The team will play a doubleheader at home on Tuesday, March 6 against the Saint Louis College of Pharmacy. Game one starts 2 p.m.