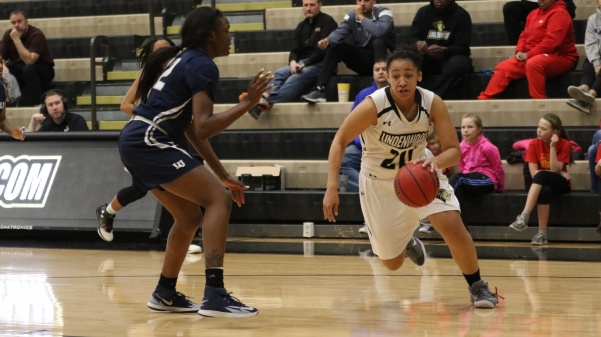 Forward Gabby Walker, No. 20, drives to the basket for the layup in Lions' 83-73 win over Lincoln on Feb. 10 at Hyland Arena.
Photo by Kyle Rhine

The women’s basketball team defeated Fort Hays State 58-51 to win the MIAA conference tournament Sunday afternoon at the Municipal Auditorium in Kansas City, Missouri. It is the first time in Lindenwood program history the team has won the MIAA Championship.

The Lions will face Augustana University of South Dakota (27-3) in the first round of the NCAA Division II tournament on Mar. 9 in Sioux Falls, South Dakota. Augustana’s average margin of victory in its NSIC conference championship was 26 points.

Lindenwood was down early, as Fort Hays state was up 15-2 early in the first quarter. Despite the slow start, the Lions began the second quarter on a 9-2 run started with a layup by Gabby Walker and a three pointer from Lindsay Medlen. Fort Hays led the Lions 30-27 at halftime.

The Lions outscored Fort Hays 11-10 in the third quarter to cut the Tigers’ lead to two going into the final quarter. Kallie Bildner’s layup started an 8-0 run to give the Lions a 46-40 lead to begin the fourth quarter.

Fort Hays cut the Lions’ lead to 46-44 with 2:26 remaining, but Medlen countered with a 3-pointer to give Lindenwood a five-point lead. In the closing minutes, free throws by Bildner sealed the championship.

“I honestly can’t explain it,” Walker said. “I’m incredibly happy and exhausted and looking forward to the next game.”

Following the win, Lindenwood will advance to the NCAA tournament because of the automatic qualification.

“Honestly I’m so in awe right now, ” Bildner said. “Everything is just setting and we are really in the national tournament.”