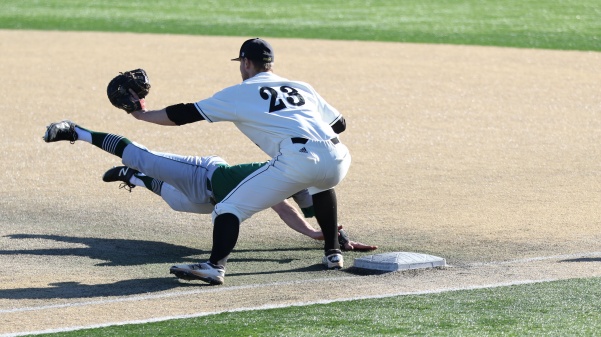 First baseman Neil Fischer, No. 23, attempts to tag out a Northeastern baserunner on a pickoff move from pitcher Tyler Cassmeyer in the Lions' 5-2 loss against Northeastern University Feb 25. at Lou Brock Stadium.
Photo by Kyle Rhine

The baseball team dropped its seventh game of the season in Tuesday’s 14-2 loss against the University of Illinois Springfield in Springfield, Illinois.

Justin Taylor started for the Lions, lasting just one inning allowing four runs, three of them earned. Taylor allowed three hits, one walk and struck out one batter in the loss.

Lindenwood was down four runs in the fifth inning, but a bases-loaded walk and a RBI groundout off the bat of D.J. Miller cut the Prairie Stars’ lead to two.

However, the Prairie Stars’ erupted in the bottom of the fifth with eight runs crossing the plate. The Lions trailed 12-2 after five innings and failed to muster any more runs.

Lindenwood put together just three hits and only had seven baserunners in the loss. The defense of the Lions coughed up four errors which led to one Prairie Stars run.

Following the loss, Lindenwood has dropped four of its last five games to push the Lions’ record to 10-7 on the season.

Lindenwood currently sits sixth in the MIAA conference with a record of 3-3 and will look to improve its record when the Lions travel to Joplin, Missouri, Friday to begin a three-game series against 14-3 Missouri Southern. First pitch is at 3 p.m. from Warren Turner Field.