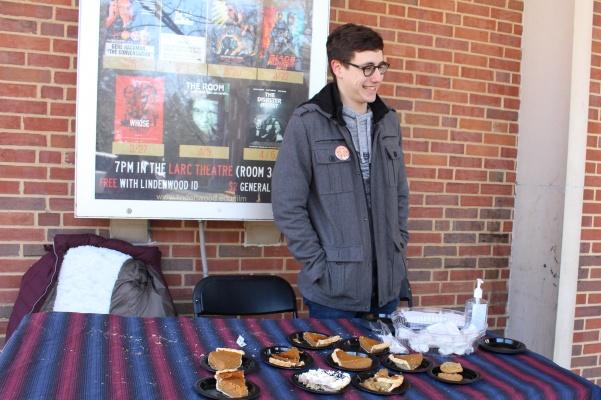 Dillon Bys, vice president of the Mathematics club sets up a table with free pies and buttons outside of Young. The Mathematics Club celebrated Pi Day or 3.14 day early because Pi Day falls on spring break this year.
Photo by Abby Stone

Lindenwood’s Mathematics Club decided to celebrate Pi Day a week early because of the holiday falling during spring break.

3.14 is a number known by all who have taken a basic mathematics course as pi, and on March 14, there is a celebration known Pi(e) Day.

Vice President Dillon Bys and Treasurer Matt Taylor set up a table outside of Young Hall at 10 a.m. on Thursday and handed out free slices of pie and buttons.

Bys said they started with ten whole pies at 10 a.m. They had originally planned to go until 1 p.m. but were running out of pies at 11 a.m.

“Math is hard, so we figured we’d post ourselves outside of Young to make people feel better before spring break,” Bys said.

They offered an assortment of apple, pumpkin and chocolate pies. Very few pieces were left after only an hour of the event.

Bys and Taylor also said they are two of the founding members of the Mathematics Club.

The club became official last October, according to Taylor. Bys said the club is planning to put on one big event a month.

Next month, they are planning a kickball game between math and computer science people according to Bys.