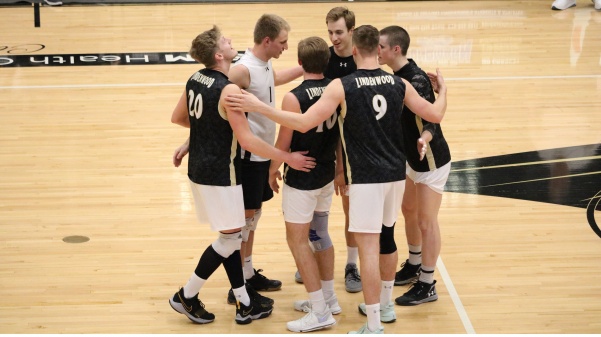 The men's volleyball team celebrate winning a point against Lincoln Memorial on February 3 in Hyland Arena.
Photo by Joey Mesenbrink

The loss was the Lions’ eighth loss in the last 10 games. Setter Adam Brewster set a Lindenwood NCAA record on the night with 63 assists.

The Lions were led by sophomore Stevenson on offense. It was only his fifth start this season. Stevenson’s 21 kills was a season-record for the Lions. Stevenson was matched by St. Louis native and 6 foot 11 inch Princeton middle hitter George Huhmann. Huhmann recorded 19 kills to go along with his six blocks as he led all Princeton hitters.

Connor Hipelius continued his strong form with 11 kills. The junior has 127 kills this season and is currently hitting a team high .387.

“I thought we did well on the offensive side of play and we did a great job blocking last night,” Hipelius said.

The Lions will next face conference opponent Ohio State at 2 p.m. on Sunday, March 25 in Hyland Arena.