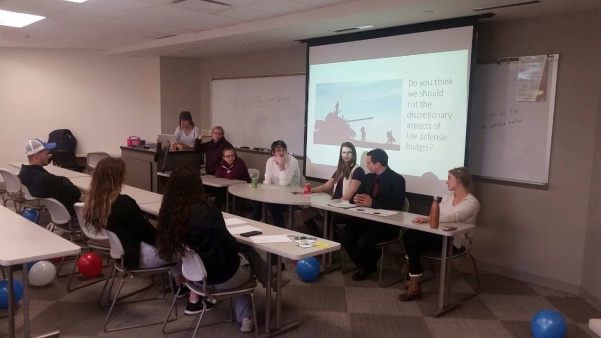 A team of three students held events on campus to raise awareness of the U.S. national debt for a national competition sponsored by the nonprofit UpToUs.

Senior Lauren Baker, who leads the team, said teams of up to 10 people at over 50 campuses participate in the competition and are judged based on how much how much engagement they can generate about the debt.

Thursday at 5 p.m., the team held a discussion on the national debt with a five-student panel in Harmon Hall. The panelists were Katy Wiesehan, a member of the UpToUs team; Evan Collins, a member of the Religion Honors Society; Megan Paul, a member of business fraternity Delta Sigma Pi; Jonathan Dunlop, vice president of College Republicans; and Jessie Basler, president of the Collegiate Democrats. The panel was planned to include professors as well, but they were not able to come.

After Baker went over details about the debt, the panelists discussed the different sectors of the discretionary budget and what could be done to limit government spending.

The national debt is over $21 trillion according to the U.S. Treasury, and increasing federal spending has caused some to worry about the sustainability of the budget.

Paul, whose brother worked in supply for the military, said defense spending, the largest section of the discretionary budget, is inflated by extreme prices the government pays for supplies.

“They would have these HumVees where every part was supplied by a private contractor, and if one piece was missing, regardless of whether the Army got it without that part or not, they had to pay ridiculous sums of money,” she said. “Say a tire wrench was missing, it was like four grand.”

Paul, a junior double-majoring in economics and finance, recommended a reform she plans to write a thesis on for her Ph.D. in Economics: Universal Basic Income, a policy which would replace welfare programs with a single payment.

“People would still have the same monetary level of benefits, but we wouldn’t be spending as much because there’s not all the government bureaucracy behind it,” she said.

Paul, who is from Pennsylvania, said she doesn’t think the national debt will be solved soon, but the fact that people are discussing it gives her hope.

The debate featured free pizza and sodas, and the team raffled off gift cards to attendees. Baker, who is from Springfield, Illinois, estimated 50 to 75 people would attend, but 15 were there.

The team is not a campus organization, but rather is funded by the nonprofits UpToUs, which has the goal of finding solutions to the debt, and Net Impact.

The winning teams will go to D.C., and the top team will present with former President Bill Clinton.  Baker said the Clinton Foundation is “closely tied” but “not officially affiliated” with UpToUs.

Baker, an International Business and Comparative Religions major, started an UpToUs team because it was good leadership experience.

Baker said they were more successful than she expected at getting students engaged in the issue. She said business majors like her tend to be more aware of the national debt, but it helped to bring up its personal impact to students in other fields.

“If they don’t have any way to fund Social Security, it will impact people in like health services, so we’re trying to reach out to them for those reasons,” she said.

In February, the team held two events at which Baker said they interacted with about 200 students.

On Super Bowl Sunday, they handed out candy that said “The debt is coming” and that interest payments on the national debt will be higher than defense spending in 2048.

They later tabled in front of Spellmann cafeteria for “My Two Cents Day,” where they talked to students about national debt facts and held a raffle.

When Baker started the competition, she and her team didn’t know much about the debt. She said her goal is to bring people together to discuss and hopefully find bipartisan solutions to the national debt.

“We’re not here claiming to be experts on it; we’re just here trying to give you the facts that we have and ask you to at least take this concern seriously,” she said.