Opinion: Old tennis courts an eyesore that needs a makeover 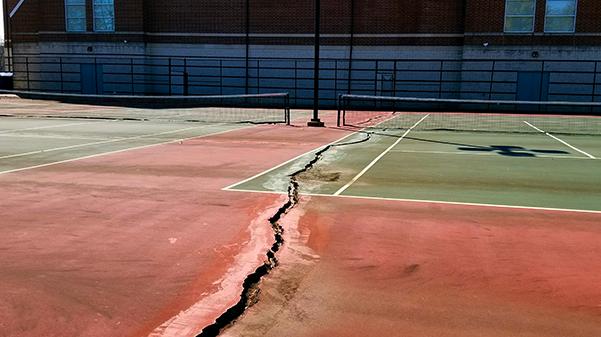 The tennis court directly next to the Hyland Arena has seen better days. Instead of leaving the eyesore as is, the space should be renovated as an outdoor basketball court.
Photo by Michelle Sproat.

If you’ve ever spent time walking or driving around Lindenwood’s campus, you’d notice all of the beautiful features that it has to offer. The streets lined with trees, the historic buildings and more scenic features.

So when something on the campus is less than appealing to the eye, it’s quite noticeable. The biggest eyesore on this campus is the tennis court directly next to Hyland Arena.

The space is approximately 26,000 square feet according to Diane Moore, vice president of operations at Lindenwood’s St. Charles campus. Moore did not comment on whether there were plans to renovate or repurpose the space.

Considering the space and location, I think it should be repurposed as an outdoor basketball court.

There used to be half-court outdoor basketball hoops in the Hyland Arena parking lot, which were rarely used and subsequently were removed over the past two years. This location was not only unsafe for people to play at, but the hoops didn’t have nets and did not have basketball court upkeep.

Not only that, but there is a newer outdoor tennis facility with eight full courts behind Reynolds Hall. No one is going to the court next to Hyland to play tennis, so repurposing the space won’t move anyone out of the way.
Let’s talk math
Currently, there are four 78-by-36 foot tennis courts across the 130 foot by 200 foot space. There are 11 feet between each court, including between the gate and the court. There are three lights placed in the 11-foot space between the courts as well. From the ends of the court to the gate, there is a 26-foot gap.

Considering these dimensions, there would be room for two full size outdoor basketball courts. A full-size court measures at 90 by 60 feet. The lights that were placed between the tennis courts could be moved to either the ends of the basketball courts or in each corner of the gated area.

There would be a 26-foot gap between the gate and each court and also in between each court, leaving bench space for spectators to watch or for teams to rest on.


Not just for ballin’
The court doesn’t need to be limited to basketball. Creating a multipurpose court can allow for other outdoor sports such as floor hockey and volleyball.

Not only that, but organizations can have the opportunity to rent out the space for events and activities. This will expand the options for groups on campus to meet outside, weather permitting.

However, none of this will be possible on a broken foundation. As shown in the photo at the top of the story, there seems to be a major flaw in the foundation of the current court, considering there’s a giant crack down the middle that looks like an earthquake fault.

One of the best ways to achieve this outdoor multipurpose court is by using court tile as opposed to regular concrete. Court tiles are easier to maintain than other types of foundation, they are durable, come in a variety of colors and often have a lifetime warranty depending on which company is chosen.

Outsourcing the project to a company that not only installs the court tile, but also resurfaces the foundation and can result in a beautiful project that will last for years.
So now what?
When it comes down to the monetary expenses, it won’t be a cheap project. Ripping up the current foundation, leveling the surface, installing the new foundation, adding the court tile and getting equipment will add up.

However, having a tennis court that looks like the underworld is trying to break through is not a positive sight for incoming or current students. Having a multipurpose court that will last for decades will benefit current students as well as their organizations.