Student charged with felony invasion of privacy released from jail; victim speaks out 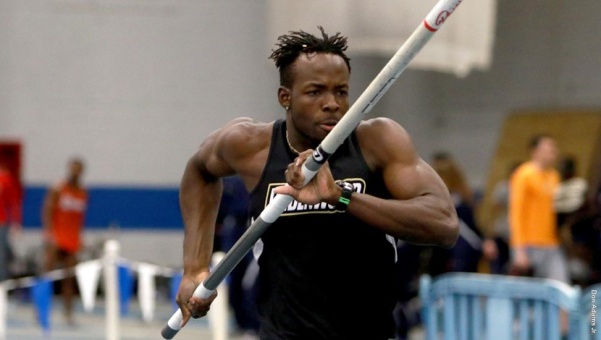 Xavier Boland, a member of the track and field team at Lindenwood, was charged with three counts of felony invasion of privacy. File photo of Boland's pole vaulting competition by Don Adams Jr. and Lindenwood Student Life Sports website.

Lindenwood student-athlete Xavier Boland, 24, of Jamaica was released from jail on Monday, March 19, after his $15,000 bail amount was posted. One of his alleged victims agreed to speak with the Legacy about the investigation.

According to the St. Charles County Circuit Clerk’s office, Boland’s bail was posted by Georgina Boland. It’s unclear if she is a relative of Xavier’s.

Boland was charged with three counts of felony invasion of privacy after he recorded his roommate engaging in sexual activity with two different women between Jan. 1 and Feb. 18, according to court documents.

One victim, who asked to remain anonymous, shared her story after numerous students and classmates confirmed that Boland had returned to campus and was attending classes Tuesday.

Both the dean of students and the Title IX coordinator declined to comment on his status as a student at this time.

Since the decision to disallow Boland from returning to classes was not immediately made, the victim changed her course schedule to online.

Lindenwood has been in contact with the victim though, offering counseling services which the victim says “have been great,” and “they have answered all questions I asked and provided their sympathies. I wasn’t happy with that either,” she said in regards to Boland not being immediately dismissed from campus.

Although Boland has been charged with three counts of felony invasion of privacy, the victim is pursuing charges of sexual assault as well.

“The videotapes are not my concern,” she said. “The events following are what has really left its scar and yet every report just skims over the fact that this man attacked me and tried to rape me and focus on the scandalous videos [instead].”

On Jan. 10, the victim left Boland’s residence in the 300 block of Droste Road in Lindenwood’s non-traditional housing after she discovered he had been secretly videotaping her engaging in consensual sexual activity with his roommate.

“I made it to the sidewalk right outside the back of the house before he was outside as well. He was holding up his phone threatening to put the videos of me he had recorded on YouTube if I didn’t return into the house,” she said.

When the victim re-entered the house, he pushed her gently towards his room at first, then once she realized what was going to happen she started to resist. Then he shoved her into his room.

“When I rejected him, he said it was ‘too late now.’ While my assault was happening, he kept telling me to stop fighting or he would ‘have to do something very brutish,’ and kept telling her ‘it wasn’t supposed to go this way.'”

She was able to get away from Boland and ran to a friend’s house, calling the police from there.

In an email to Lindenlink Friday afternoon, Boland said that he has been advised not to give any statements, “However I will express my disappointment in the media for portraying such inaccurate and misleading information and I appreciate anyone who had the wisdom to see through it.”

According to the St. Charles Police court documents, Boland denied sexually assaulting the victim claiming that she “made up the sexual assault to get authorities to make him erase the videos.”

Boland’s attorney could not be reached for a comment.

Editor’s Note: This article has been updated to include a statement from Xavier Boland.