Lions erupt for 24 runs in doubleheader sweep over Emporia State 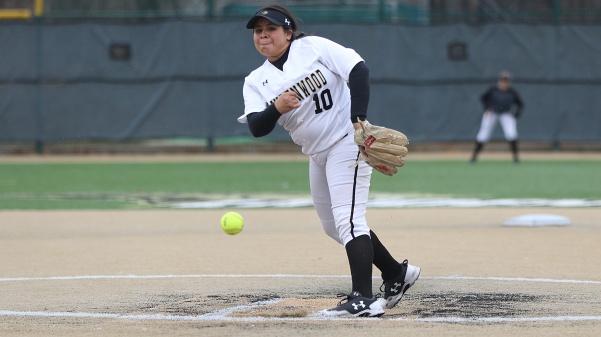 Pitcher Marina Esparza, No. 10, delivers a pitch in the Lions' 7-1 win over Emporia on Friday afternoon.
Photo by Kyle Rhine

The Lindenwood softball team broke out for 24 combined runs during the doubleheader sweep against Emporia State Saturday in St. Charles.

In game one, Marina Esparza pitched a complete game allowing just one run on four hits, one walk and four strikeouts en route to Esparza’s seventh win of the season.

Emporia got out to an early 1-0 lead in the third inning on a solo home run, but after that, it was all Lions. Lindenwood countered with three runs in the bottom half with some timely hitting.  Stormee Galka tripled with two outs to drive in Austine Pauley, and Hanna Porter followed up with a single up the middle to score Galka giving Lindenwood a 3-1 lead.

In the sixth inning, with the Lions leading Emporia 5-1, Pauley came up to the plate with one on and two outs and smashed a two-run home run to left field for her first home run of the season.

Pauley had herself a day at the plate, going 2-4 with a home run and three RBIs in the 7-1 game one win over Emporia.

The Lions’ bats did not slow down in game two with Lindenwood scoring 13 runs in the first two innings highlighted by Adele Linderman’s one-out single down the line scoring Porter and Galka in the bottom of the second.

Galka started on the mound for the Lions allowing nine hits, five runs, four earned; one walk; and two strikeouts in five innings.

Left fielder Paige Callans went 3-4 at the plate with two RBIs, four runs scored and a stolen base in the Lions’ 17-5 win during the second game of the doubleheader.

Following the sweep, Lindenwood is 16-12 on the season and will have a doubleheader with conference opponent Washburn University Sunday, March 25 at home. Game one is scheduled for noon and game two is set for 2 p.m. at the Lou Brock Sports Complex.