On the inside of “On the Inside” 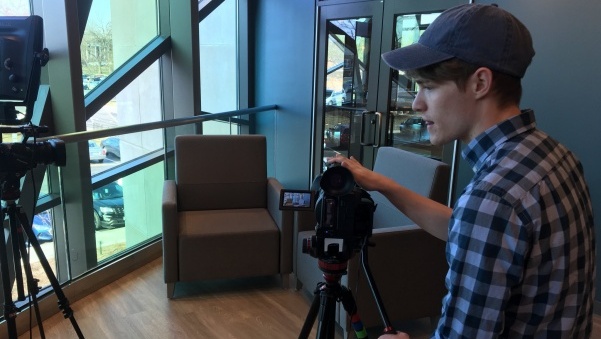 Chris Brueggeman on the set of his show "On the Inside," which airs on LUTV and LUTV's YouTube channel, "LUTVOnline."
Photo provided by Chris Brueggeman.

Lindenwood student Chris Brueggeman attempts to raise the bar at LUTV with his new show, “On the Inside.”

“On the Inside” is Brueggeman’s show that dives into the lives of a variety of different trades, one episode at a time. The first episode was hosted by Samantha Glenn, where she interviewed Tiara Peach, a makeup artist native to St. Louis.

Glenn asked different questions pertaining to Peach’s job, her life and her motivation. Then in the second half of the show, Glenn got a hands-on look with a makeover.

Brueggeman is also the director for each episode. He works on-set with the host and interviewee, along with all of the set helpers.

Brueggeman said, “The point of the show is to figure out what these different people do [at their jobs], and how their daily lives involve their job, and how they got to that point.”

There are currently three hosts that will rotate through episodes: Glenn, Romero Starks and Brie McLemore — all students at Lindenwood and involved with LUTV.

One thing that sets “On the Inside” apart from other shows on LUTV is the location. Each episode is filmed on location rather than in the studio. This is the first show to showcase that on LUTV.

“It’s really different than anything on the LUTV channel. … It has a lot more graphical elements that make it interesting — it looks a lot more modern,” Brueggeman said about what stands out with his show.

“I would say one episode usually takes roughly around 12 hours. … I’m the one editing; I know what I’m looking for,” Brueggeman said.

He would like “On the Inside” to continue after he graduates.

“If there’s someone that’s willing to pick it up even though it’s a lot of editing, I’m totally fine with that,” Brueggeman said. He also said he would like to be involved after graduation, given his job allows him.

Currently, two episodes of the show have aired on LUTV.

The most recent one is about a local florist in St. Charles, hosted by McLemore. She talks to the florist about the daily duties and what it takes to do the job.

The third episode is hosted by Starks. He interviewed a barista at a coffee shop, where the barista talked about different types of coffee, the coffee shop work-life and why he likes it.

Brueggeman loves to see his show come together slowly. “It’s mainly post-production,” he said; meaning a lot of the work is done after they finish recording. It’s what binds everything together to create the final product.

There has been a lot of positive feedback from Brueggeman’s friends, family and teachers.

Brueggeman’s show currently airs on LUTV and can also be seen on “LUTVonline,” their YouTube channel.

Breuggeman said, “Watch the show! I really hope people like it.”