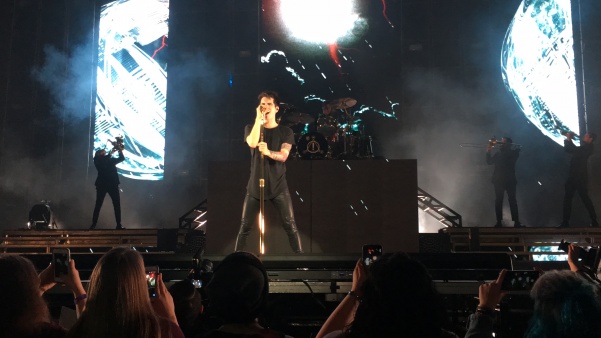 Brendon Urie of Panic! At The Disco in St. Louis at the Scottrade Center on April 5, 2017, during the "Death of a Bachelor" tour.
Photo by Samantha Kimball

After days of secret messages and pop-up shows in small venues across the country, Panic! At The Disco gave fans new music to listen to on March 21.

One of the songs, “(Fuck A) Silver Lining,” focuses on wanting to stand out in everything one does while wanting to see the best in every situation.

The words “silver lining” in the chorus come from the phrase “every cloud has a silver lining,” which means that every setback has some sort of positive outcome.

While “(Fuck A) Silver Lining,” is repetitive with both the first and second choruses, the bass line and Brendon Urie’s well-known vocal range are what make the song catchy.

Lyrics such as “‘cause only gold is hot enough, hot enough,” and “it’s just cherries, cherries, everything is cherries on top,” are sang with high levels of energy, which creates the right environment for it to be performed live.

Urie also dropped another song by the name of “Say Amen (Saturday Night),” which mixes themes of religion with a catchy piano and guitar instrumental track.

“I pray for the wicked on the weekend” is one of the lyrics in the chorus that can be seen in a religious context.

In the Bible, “the wicked” are a group of people that are shunned by the church for not having the same beliefs; the church wouldn’t pray for them.

Another lyric that has religious context is “swear to God, I ain’t ever gonna repent,” which is a wordplay based on repentance, the confession of one’s sins with a priest or a minister and involves asking for forgiveness of a wrongdoing, according to the Merriam-Webster dictionary.

According to lyric website Genius, Urie makes the line “swear to God, I ain’t ever gonna repent,” an oxymoron by “swearing to God.”

In addition to religion, another message in this song is being the best person that one can be without changing who they are, which is similar to the messages in “Silver Lining.”

A music video was released for “Say Amen (Saturday Night),” which got positive feedback on YouTube.

One fan commented, “I’m so excited for the new album!”

On the same day that Urie released the two songs, he also announced a tour, which kicks off on July 11 in Minneapolis, Minnesota.

Tickets for the “Pray for the Wicked Tour” are on sale now and can be purchased through Ticketmaster.