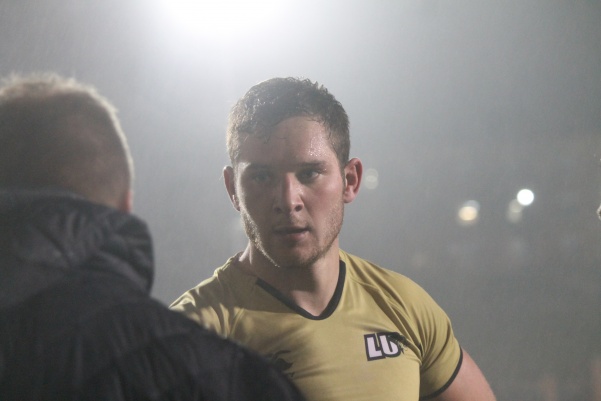 Wes Parker speaks to coach Aaron Browne during a break in play in the Lions' 31-12 loss to No. 2 Life University. The game was played in Hunter Stadium on Saturday, March 24.
Photo by Kyleigh Romero.

The Lindenwood men’s rugby team had a difficult loss to No. 2 ranked Life University, coming up short 31-12 in a Mid-South Conference matchup Saturday night at Hunter Stadium.

After a terse first 20 minutes, Life opened the scoring with a try. An equally played match proceeded before the Running Eagles scored again to take a 14-0 lead into halftime.

After the break, the Running Eagles came out even stronger and scored an early try making the score 19-0. Shortly after, 8-man Wesley White put Lindenwood on the scoreboard with the Lions’ first try of the day. Following the Lions score, flanker Michael De Waal was injured and taken out for the rest of the match.

With regained momentum Lindenwood scored another try tightening the score to 1-19-12 heading into the last 20 minutes. Life then took control of the match, scoring twice and leaving Lindenwood with another loss to the Running Eagles this season.

Injured flanker Ayden Hurst summed up the performance. “This is a disappointing loss and our team played OK, but there is definitely a lot to work on,” Hurst said. “It is unfortunate not to get the win, but we will be back next time,” Hurst said.

Hurst also believed Chance Wenglewski and Giovanni Falco were key players that contributed to the continual efforts of the Lions to defeat the Running Eagles.

This loss to Life leaves the Lions second in the conference and No. 5 in the nation adding to their 17-3 record this season. They will continue onto their next conference game against Davenport University on March 31 in Grand Rapids, Michigan. The Lions have previously defeated Davenport 57-7 this season.