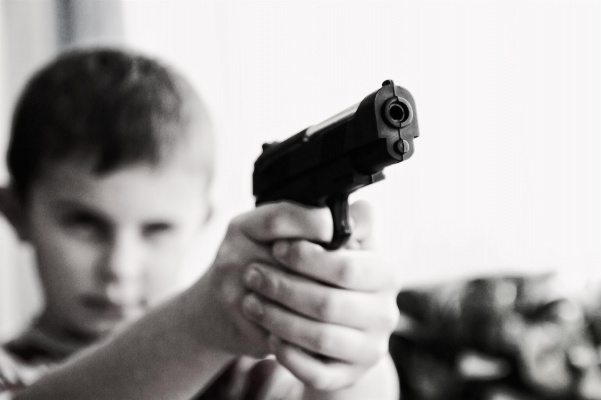 Banning assault rifles won't protect American children from the dangers of the world.
Photo from pixaby.com

It’s 2018, and for what seems to be the hundredth time, the fierce debate over the assault rifle has been brought back for yet another review.

Nearly all Americans are aware of the tragic shooting in Parkland, Florida, in which a deranged former student took an assault rifle into his old high school and opened fire, ultimately killing 17 students and wounding many more. Mass shootings of this magnitude, while rare, attract a lot of attention and inevitably cause people to question whether a developed society like the United States should allow its people to own assault rifles like the one used in the Florida shooting.

Many of the teenage survivors of the shooting quickly organized into the #Neveragain movement to fight for a variety of gun control measures that they feel will put an end to mass shootings. One of these measures is the banning of assault rifles.

According to many of the Parkland survivors, these types of rifles are “weapons of war” and should be banned immediately. Allowing these weapons to be privately owned, argue several of these students, puts the children of America in serious danger.

As a student myself, I fully support the right of all the young people of Parkland to have their voices heard. However, this doesn’t mean I have to agree with them, because I don’t.

I am not a gun owner myself, but I grew up in a small town in rural Missouri around all sorts of guns and am generally skeptical of the idea that these types of blanket gun regulations will save lives.

Every year the FBI releases its Official Crime Report, a report that documents every crime committed in the past year. This data is extremely important in understanding the effects an assault weapon’s ban would have. Let’s look at some of the data.

The crime reports for the last five years show that the average number of gun murders is roughly 9,300 per year. The data from the FBI further showed that assault rifles were responsible for less than 2 percent of these deaths. If you do the numbers, you will find that fewer than 200 murders per year will be committed with assault rifles.

As things stand now, an American citizen has a one in 1.6 million chance of being killed with an assault rifle and is twice as likely to be struck by lightning. All deaths are tragic, but in a country of 325 million people, 200 is not a big number. Most experts estimate there are about 4 million privately owned assault rifles in the United States. With fewer than 200 murders coming from these types of weapons, simple math tells us that the percentage of assault rifles that will be used in a homicide is 0.00005 percent. That’s less than one out of every 20,000.

Consequently this means that literally 99.995 percent of assault rifles will never be used to kill another human being. People calling for assault weapon bans have to explain the reasoning behind banning literally millions of guns over the scant few that will be used in murders. Even the weapons used in mass shootings are not likely to be assault rifles.

Often we hear the argument that military-style assault rifles are the “weapon of choice” for mass shooters. This claim is shaky at best. The Congressional Research Service compiled a data-bank of all mass shootings for the past 30 years.

It documented the type of weapon used in every mass shooting and concluded the following: “Out of 317 ‘mass shootings,’ offenders used firearms that could be characterized as ‘assault weapons’ in 31 incidents (9.78%), or roughly 1 out of 10 incidents.”

Basically, assault weapons are used in less than 10 percent of mass shootings. A weapon that is used in a crime only 10 percent of the time is hardly the weapon of choice. The remaining 90 percent of firearms used were almost overwhelmingly handguns. When only a small percentage of mass shootings are being committed with assault rifles, basic logic tells us that banning this type of firearm would barely even make a dent in the number of mass shootings, if it has any effect at all.

Let’s put this type of thinking into context.

The Center for Disease Control reports that the average number of children murdered by all firearms per year is roughly 1,300. Knowing that less than 2 percent of gun murders will be perpetrated with assault rifles, and assuming the rates are the same by age, its not hard to calculate the average number of children murdered by assault rifles per year. The number is about 30. Thirty too many to be sure, but in a nation of 325 million people, a child’s chance of being killed by an assault rifle is pretty slim.

Compare this to swimming pools. Around 1,600 children will drown in swimming pools every year. This means that a child is over 50 times more likely to drown in a swimming pool than to be killed with an assault rifle. I’ve yet to hear anyone calling for the banning of swimming pools. If the goal is to save lives, and even one life saved is worth it, then where are all the calls for common-sense swimming pool control? Why not just ban them? Think of the children!

And it’s not just swimming pools either. Eleven teens will die every day because of cellphone use while driving. That’s over 4,000 per year. Using the same simple math, we find that a child is more than 130 times more likely to die from cellphone use than from an assault rifle. That’s staggering.

How about this: If we really care about saving lives, shouldn’t we ban teenagers from owning cellphones? Wouldn’t this save more lives than banning assault rifles? It certainly makes sense that way.

In reality, no one is going to push for a ban on teens owning cellphones because while assault rifles are extremely scary to many people, cellphones are not. This still doesn’t change the fact that the odds of you being shot by an assault rifle are far, far less than your odds of being T-boned and brutally killed by a distracted driver.

A ban on assault rifles will not save lives, but even if it could, there are bigger issues at stake. Every human being has the right to protect themselves and the people they care about. An assault weapons ban denies this right, and in doing so endangers the freedom and security of our country.

Because of this, I and millions of patriotic Americans will continue to oppose a ban on assault weapons.

It’s nice to think that we can solve our problems just by writing laws to ban scary things. If only life were that simple. It just isn’t. Bans on assault weapons won’t stop mass murderers, they won’t stop school shootings and they certainly won’t stop evil, psychotic people from finding new ways to kill innocent people. Feeling safe and actually being safe are two different things, and no matter how scary assault rifles are, banning them won’t make you or any child safer.