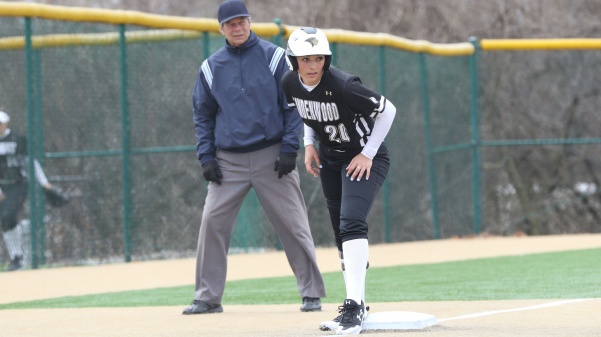 Hanna Porter, No. 20, leads on third base before scoring the Lions' first run of the game in Lions' 9-1 loss to Washburn on Sunday.
Photo by Kyle Rhine

The Lindenwood softball team fell in both games during the doubleheader on Sunday against conference opponent Washburn in St. Charles.

Marina Esparza started in game one allowing nine runs, eight of which were earned, in five innings. Esparza surrendered nine hits, four walks, and six strikeouts.
Washburn got on the board first in the second inning with four Ichabods crossing the plate because of two errors committed by the Lions.

Adele Linderman got the Lions on the board with a single to left field scoring Hanna Porter in the bottom of the second to cut Washburn’s lead to 4-1.

In the fourth inning, the Ichabods scored two more runs highlighted by the home run from Savannah Moore to extend the lead to 6-1. Washburn added three more runs in the fifth inning, defeating Lindenwood 9-1 to take game one of the doubleheader.

The Lions’ struggles continued in game two as Lindenwood found themselves down 5-1 after the fourth inning and couldn’t make up the ground. Washburn continued to add pressure by scoring two runs of its own in the fifth inning and went on to defeat Lindenwood 8-2 to take both games of the doubleheader.

Stormee Galka made the start and lasted just three innings, allowed four runs, three of which were earned, and one strikeout.

Lindenwood had just six hits in the loss. Austine Pauley and Sam Dean combined for four hits; each of them had two.

Following the series loss, the Lions are 16-14 on the season and will look to bounce back when they face the University of Central Oklahoma at 1 p.m. and 3 p.m. on Friday, March 30 in Edmond, Oklahoma.