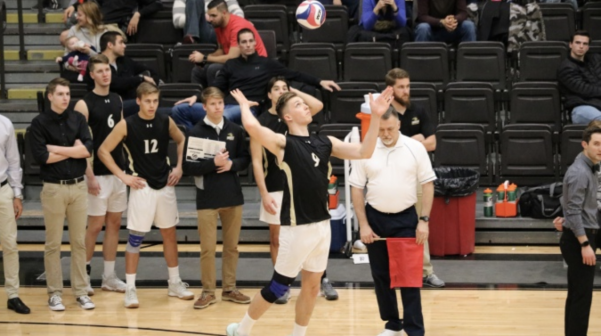 Connor Hipelius hits the ball against Lincoln Memorial on Feb. 3 in Hyland Arena. Hipelius has been one of the Lions' most potent weapons on offense this season. Photo by Joey Mesenbrink

The losses add to the Lions’ cold streak with the team unable to find a win in the past five games. It also leaves the Lions lingering at seventh in MIVA conference standings.

The Lions’ hitting was a low point across the weekend. During the two games they hit .133, well down on their season average of .216. However, junior Connor Hipelius managed to hit .316 across the weekend to go with 16 kills.

The play of Hipelius and fellow middle hitter Sam Schindler has been a continual bright light for the Lions this season.

Schindler turned in a commanding performance against Ball State, recording 13 kills and no errors en route to hitting .650. Schindler also put in a dominant display on defense as he slammed his way to 10 blocks.

Schindler’s performance against Ball State meant that he led the Lions on the weekend with 20 kills and 12 blocks across the two games.

Schindler and Hipelius have been the Lions most powerful and effective hitters throughout the season. Schindler currently sits atop the Lions hitting statistics as he is hitting .390 and has recorded 152 kills. Hipelius is right on his tail with 151 kills and a .375 hitting percentage.

The Lions will hope they can cause an upset when they play Loyola University of Chicago (20-5, 10-2 MIVA) on April 5 at 7 p.m. in Hyland Arena