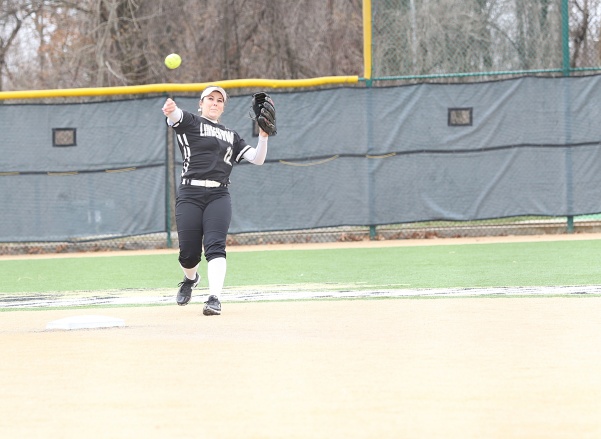 Second baseman Sam Dean, No. 12, throws runner out in the Lions' 9-1 loss to Washburn on March 25.
Photo by Kyle Rhine

The Lindenwood softball team lost both games during Saturday’s doubleheader against conference opponent Northeastern State 13-10 and 4-2 in Tahlequah, Oklahoma.

The Lions jumped out to an early lead after some timely hitting from the offense. Austine Pauley drove in two out of the seven runs in the first inning on a single up the middle. Northeastern State countered with two runs in the bottom half of the inning as the Lions led 7-2 after one.

After a home run from Hanna Porter in the second inning, Pauley followed up with a home run in the third inning giving the Lions their seven-run lead back.

In the sixth inning, Marina Esparza reached on a fielder’s choice scoring Stormee Galka and the Lions led 10-3. However, things unraveled for Lindenwood in the bottom half of the inning as the RiverHawks scored 10 runs to take a 13-10 lead and game one of the doubleheader.

Stormee Galka started on the mound for the Lions, going six innings, allowing 12 hits and 11 runs. For Galka, it was the most runs she has allowed all season.

The struggles continued for the Lions in game two as Northeastern got on the board first with two runs crossing the plate in the third inning. Porter tied the game at two the next inning on a two-run home run to left-center field. For Porter, it was her second home run on the day and her fourth of the season.

Northeastern came back with a run of its own in the bottom half of the inning and added to its lead with a run in the sixth to make it 4-2. The Lions couldn’t muster any offense in the final inning as the losing streak hit six.

Following the series loss, the Lions are 16-18 on the season and will travel back home to play conference opponent Lincoln University at 2 p.m. and 4 p.m. on April 6 in St. Charles.