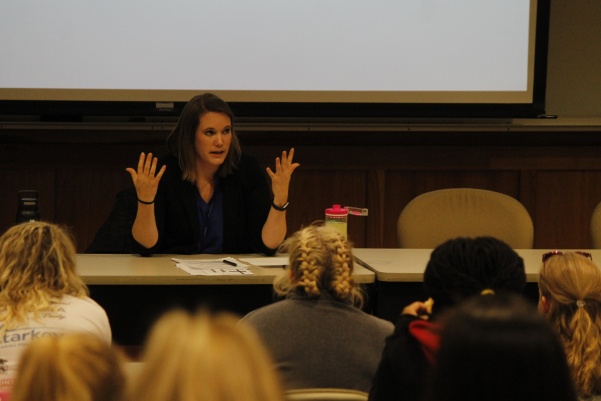 Samantha VanNatta representing the St. Charles County Department of Health Tuesday night during a panel for sex education. This panel informed students on where to go if they need assistance and answered any questions students posed to the panelists.
Photo by Matt Hamptpn.

Each speaker answered audience questions and presented information about topics including sexually transmitted diseases, safe sex and the problems with non-comprehensive sexual education.  Professor Amy Estlund, an adviser for the PHSA, said they held the event to raise awareness of local sexual health services and promote education about sex.

About 50 students attended the event in Dunseth Auditorium.  Estlund said many fraternities and sororities encouraged their members to attend as part of Greek Week.

Samantha VanNatta, an epidemiologist at the St. Charles County Department of Public Health, spoke about the STD data collected by St. Charles County.  In 2018, the county had the highest number of chlamydia cases since 2006, she said.  Statistics also showed ghonorrea and chlamydia in St. Charles County to be most common in  Lindenwood’s ZIP code among college-aged people.

“The data doesn’t lie, it is what it is,” she said. “We need to educate ourselves on it now. At the end of the day it’s up to you.  I’m a big proponent of self-responsibility, so learn as much as you can, have those conversations, even if they are uncomfortable.”

VanNatta said the department shut down their STD clinic to replace it with a larger clinic that can provide care from hepatitis screening to cholesterol testing to those who may not be able to recieve it elsewhere.  The Department of Public Health, located on 1650 Boone’s Lick Road, will resume STD testing again on April 16th.

Another panelist, Tiffany Flaherty, is a nurse practitioner at the Lindenwood Wellness Center in Evans Commons, which she said offers testing and treatments for STDs.  The Wellness Center charges a fee for some treatments, but STD testing and other examinations and services are free and unlimited for students.

Flaherty said that students tend to seek an STD test after they show symptoms, but because common STDs do not always show symptoms, getting tested is important to know if you are infected.

Tim Williams, a community engagement manager from Planned Parenthood, spoke about the stigmas of his organization, including the belief that it only provides abortions. He said Planned Parenthood is more about providing healthcare for both women and men, with or without insurance.

“Anyone and everyone comes and sees us,” Williams said. “I’m a patient of Planned Parenthood.”

However, Planned Parenthood is the only provider of abortions in the St. Louis area, Williams said.

Julia Thorne, a psychology major with a minor in public health, helped lead the forum.  She said she met Williams through a community engagement internship at Planned Parenthood and invited the speaker because of her passion for Planned Parenthood’s mission.

The closest Planned Parenthood to campus is located at 208 Mid Rivers Mall Drive in St. Peters.

Both Planned Parenthood and the St. Charles County Health Department offer free condoms in a range of varieties.

Williams also mentioned stlcondoms.com, a website which can find locations that provide free condoms in the St. Louis Area.

Jessie Basler, president of the Collegiate Democrats, asked the panelists why condoms are not provided at Lindenwood, which Flaherty said does not have to do with the Wellness Center, but with Lindenwood and administration. Williams encouraged students to advocate for their sexual health on campus.

“Make noise so they are forced to listen to you,” Williams said. “And if there’s pushback or it doesn’t happen immediately, that’s O.K. because change is not immediate.”

Kalani Harris, a senior, asked, “How do you make sexual health sexy?” The panelists said the solution is to remove taboos to allow for honest conversation.

Williams said, “We aren’t normalizing the fact that people have sex.  It’s a thing.  It’s going to happen. Tough.”