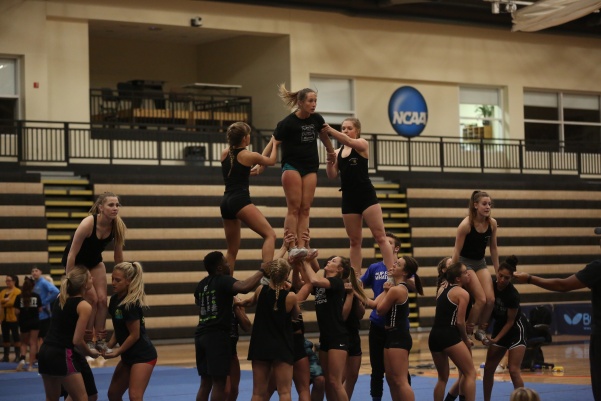 The Lindenwood cheerleading program traveled to Daytona Beach, Florida, on Tuesday for the National Cheerleaders Association College Championships after a semester of preparation.

On Tuesday April 3, the team took a 16-hour bus ride from St. Charles to Daytona Beach.

The cheerleading program at Lindenwood currently has two DII teams and one intermediate team; all three teams will be attending the NCA College Nationals held on Thursday, April 5, and Friday, April 6.

The Large Coed DII team won the national championship in 2017. This year, it will compete against five other teams in its division, with its biggest competitor being Grand Valley State University from Michigan.

“Winning a national championship last year has both helped and hurt the Large Coed DII team this year,” said team member Freddy Shatto. “We’ve had to remind ourselves multiple times throughout the season that not only is it hard to get to the top, but it is also hard to stay there.”

“Remembering all of the hard work, determination and sacrifices each athlete has made throughout the semester has helped push us through the last remaining days before we leave for nationals,” Shatto said.

Most Lindenwood students spend their spring breaks relaxing on the beach each year, but instead of taking a week off, the cheerleading program participated in extended practices every day to ensure each team was more than prepared to take the floor at nationals.

“We started the beginning of the week off strong and continued strong until the end,” Shatto said. “It was the following weeks after spring break when we started to notice flaws within our routine and felt we needed another week of extended practices to be at our very best.”

Performing on the Bandshell is a dream that every college cheerleader looks forward to each year.

“My favorite part about going to nationals is performing on the Bandshell,” Cova said. “It’s unlike any other competition because the stage is right on the beach front and feels like the ocean is right beside you as you’re performing.”

If the team wins a national championship, Cova said she would spend the remainder of her trip celebrating with family and friends and also participating in the tradition of “running into the ocean with the trophy and her team while still wearing their uniforms.”