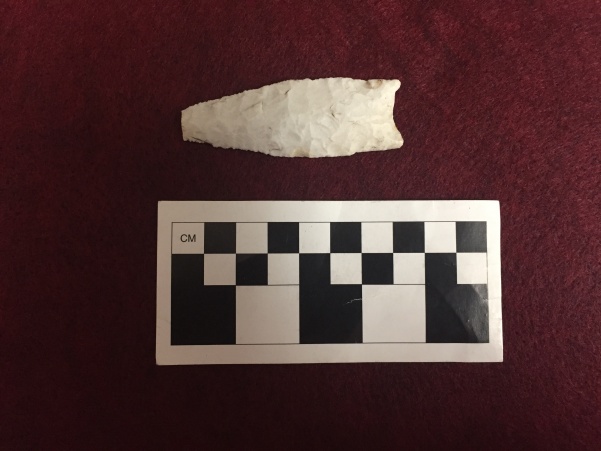 The Dalton projectile point was found in a historic Lindenwood trash dump during an archaeological survey performed by Lindenwood archaeology students. Photo by Abby Stone

Archaeology students discovered a prehistoric artifact on campus during a survey last Saturday.

Archaeology professor Steve Dasovich recently confirmed that the artifact was in fact prehistoric.

Dasovich said it is a Dalton projectile point that dates back to 8,500-9,500 years ago. This means it comes from Native Americans at the time when ice-age animals were becoming endangered and going extinct.

“[The Dalton point] is unexpected on our campus and maybe unexpected for the geographic location,” Dasovich said.

Lexi Stanley, a freshman archaeology student who was doing the survey as part of a class, found the Dalton point.

Stanley said the class was participating in a pedestrian survey which is basically a surface level search for artifacts.

“At first I thought it was a piece of ceramic sticking out of the ground, so I went and was digging around it and I found the stone tool,” Stanley said.

The Dalton point traveled from the field to the lab where it was washed, correctly identified and cataloged. Dasovich said it will be curated in the archaeology lab.

Dasovich said this survey was intended to look for materials in a historic Lindenwood trash dump.

“That’s part of the fun of archaeology; you never know what you’re going to find,” Dasovich said.

He said the Dalton point was unexpected, but not surprising. Dasovich also said that people, prehistoric, historic and present day, live in the same areas because of the resources available.

Going forward, Dasovich said the archaeology department will study this site further, maybe even through excavation.

This is not the first prehistoric artifact found at this location, but it is the oldest according to Dasovich. He says this means there could be some significant Native American activity in this area.

“I think we’ll have some fun times taking a look at the prehistoric side of Lindenwood,” Dasovich said.