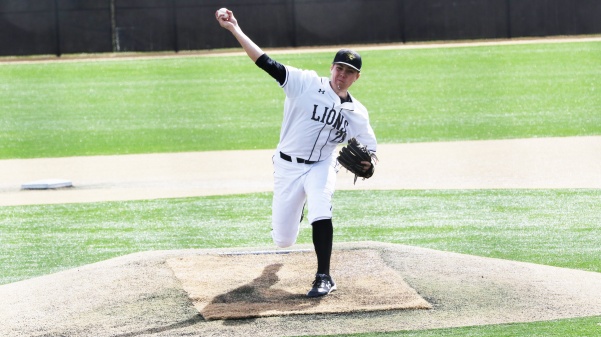 Pitcher Blake Beckmann, No. 28, delivers a pitch in the Lions' 10-5 win over Southwest Baptist University on Thursday afternoon.
Photo by Kyle Rhine

The Lindenwood baseball team split the doubleheader on Thursday against conference opponent Southwest Baptist University in St. Charles. The Lions took the first game 10-5 and fell 3-2 to the Bearcats in the second game.

Blake Beckmann started on the mound for the Lions, lasting seven innings and allowing just one run. Beckmann allowed seven hits, one walk and struck out four.

The Lions got on the board in the third inning when Drew Quinones doubled down the right field line scoring Wes Degener. Following the double, a balk was called on the Bearcats pitcher, scoring D.J. Miller with Quinones advancing to third. A few pitches later, Neil Fischer grounded out to third driving in Quinones giving the Lions a 3-0 lead headed into the fourth inning.

After Southwest Baptist scored a run in the fourth inning, the Lions came back with seven runs in the bottom of the fifth inning. Vince Saladino and Ryan Sosnowski each walked with the bases loaded scoring two runs. Dominic Revetta drove in two runs on a single to left field for his only hit of the game. Miller capped off the big inning with a single down the left field line scoring two Lions.

In the ninth inning, Southwest Baptist scored four runs, but its comeback fell short after Kyle Teter recorded the final out of the game as Lindenwood took game one of the series.

In game two, Southwest Baptist got out to an early lead in the third inning on a triple to right field. The Bearcats made it 2-0 after a throwing error was committed by the Lindenwood catcher. Southwest Baptist would add one more run in the fifth inning, as the Bearcats led the Lions 3-0 through five innings.

Ian Nelson got the Lions on the board in the eighth inning on a solo home run down the right field line, his third of the season. Lindenwood tacked on one more run on the inning on a single from Degener driving in Revetta to cut the Bearcats lead to one. In the ninth inning, the Lions were retired in order to drop game two of the series.

Following the doubleheader split, the Lions will play game three of the series against the Bearcats today at noon at Lou Brock Stadium in St. Charles.