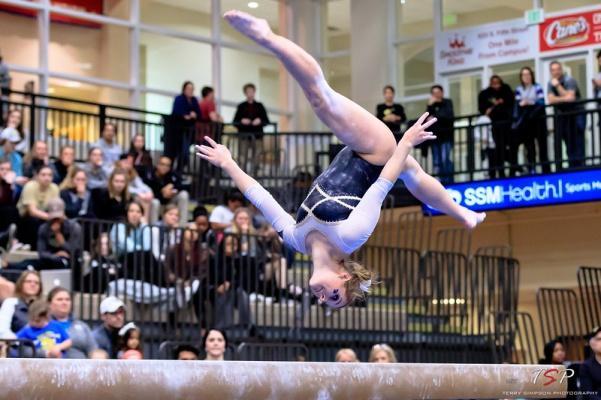 Andavea Alexander does a front aerial on the balance beam at the MIC Championships in Hyland Arena on March 23, 2018.

The Lindenwood gymnastics team has had a record-breaking season, and a major contributor to the success of the Lions is junior Anadavea Alexander.

Alexander, 22, has consistently competed in every meet this season with contributions on bars, beam and floor. Her season average on bars is a 9.641 along with a 9.673 on beam. She obtained both her career highs at this year’s MIC Championships, held in Hyland Arena, with a 9.85 on both bars and beam.

“This has been a great competition season with a lot of team growth,” Alexander said.

Her highest scoring event is floor with a season average of 9.704 and a career high of 9.975. She holds the record on this event for the highest recorded floor score in program history. In addition to this, she is the first gymnast at Lindenwood to be flashed a perfect 10 on floor.

The team earned a record-breaking 196.4 at Temple University this season, which is the highest recorded score in program history. Alexander contributed to this team score with a 9.825 on bars, 9.75 on beam and 9.85 on floor.

Lindenwood gymnastics assistant coach Ashley Lawson was full of praise for the junior. “Andy has an amazing work ethic and is a perfectionist always going above and beyond what is asked of her. I love her drive to continuously be better.”

“She [Alexander] is a very hard worker and is dedicated to her craft in gymnastics,” said gymnastics athletic trainer Thomas Dannenberg.

Along with her influence in the gym, she is working toward earning her degree in athletic training.

“I love athletic training because I have had so many injuries myself and would not be where I am today without the athletic trainers in my life,” Alexander said.

She describes it to be very difficult balancing the demands of gymnastics while still completing a required 160 hours of athletic training a year. She believes the only thing that continually gets her through the day is several cups of coffee.

When she is not training or in the classroom, she enjoys everything artistic, especially makeup. She said that she is always looking for the next trend and likes to practice on her fellow teammates. Creating different makeup looks for every competition is something she enjoys and looks forward to.

This summer she will be working as a choreographer of floor routines for several young gymnasts. However, after she graduates she would like to take her artistic skills and love for performance on to join Cirque de Soleil.

Alexander and the rest of the Lions will be heading onto their national competition April 11 at Texas Woman’s University. She will be competing on bars, beam and floor both days of competition. The team will be looking to gain its fourth championship this year and add to the continual success of the program.