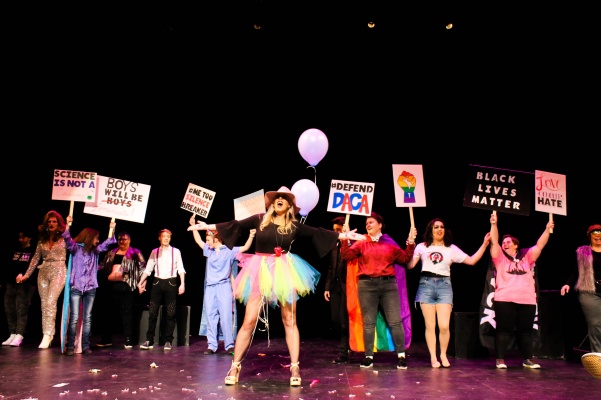 File photo: Heather Brown-Hudson and performers during the final number of the Gender Sexualities Alliance drag show on Tuesday night, "Come To Mama" by Lady Gaga.
Photo by Tyler Keohane

Before the show even began, most of the seats for Tuesday night’s Gender Sexualities Alliance drag show were filled.

This was the show’s sixth year and its theme was “Dragtivism,” hosted by Jennifer Spellazza, representative of non-traditional students at Lindenwood, and Heather Brown-Hudson, the department chair of gender studies.

During the speech, Brown-Hudson said that drag is a “painstaking effort.”

“It is a painstaking effort for a few of us, it’s a pastime for some others and it’s even a budding, passionate career for a few,” Brown-Hudson said.

The show opened with “Jailhouse Rock” by Elvis Presley, which was performed by Brown-Hudson and some of her students.

Some of the other songs performed were Kesha’s “Praying,” by Mercury Jones, whose real name is Ethan Miller. Miller began the song in a black and white coat, taking it off halfway through the song to reveal a yellow dress, which resulted in an ovation from the crowd.

“’Bet On It’ was sentimental to me because that was one I used to do when I was in college,” Von Dyke said. She attended the University of Kansas.

Von Dyke did not want to provide her actual off-stage name. She prefers to be known by her stage name.

The final song performed was “Come To Mama” by Lady Gaga, performed by Brown-Hudson.

Brown-Hudson was joined by other performers in the show holding signs that said, “Boys will be feminists,” “Science is not a conspiracy,” “Islam is American,” “#DefendDACA,” “Trans Lives Matter,” “#MeToo Silence Breaker” and “Black Lives Matter.”

During each performance, audience members held money out to the performers who came and collected it. The total at the end of the night was approximately $640 and went to Pride St. Charles.

According to Brown-Hudson, the show is one of the most attended events on campus.

Dunn had the floor for a few brief moments to talk about the pride event, which is happening on June 16 at Frontier Park in St. Charles.

The organizer of the event and president of Gender Sexualities Alliance, Brooke Parker, said they have been planning this show for about a year.

“This drag show went really smoothly,” she said. “Everything clicked, and everything worked … and I think it will continue to grow every year.”