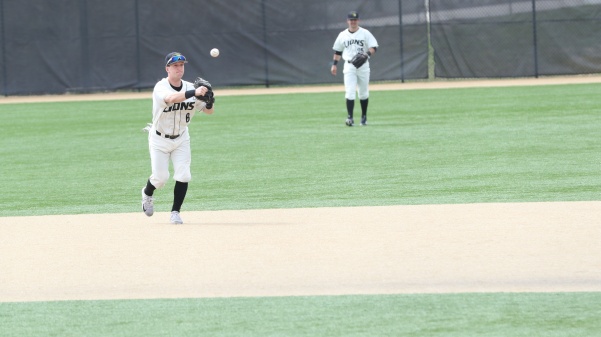 Second baseman Paul Sherwood, No. 6, fields a ground ball and throws a runner out in the Lions' 17-6 win over Southwest Baptist on April 6 in St. Charles.
Photo by Kyle Rhine

In game one of the series, the Lions were led by Ryan Sosnowski who drove in four runs and had three hits during the game. Wes Degener and Neil Fischer each had three hits and drove in a pair of runs for the 11-3 win.

Missouri Western responded in game two when the Griffons got on the board early with three runs scored in the second inning. The Lions countered with two runs in the top of the third when Drew Quinones singled to right field, cutting the Griffons’ lead to 3-2.

The Lions were down 5-2 going into the sixth when Ian Nelson cut the lead to two with an RBI single to right field. But the Griffons countered with a run in the bottom of the inning closing the books on the Lions starter Andrew Eilers. Lindenwood was unable to muster a comeback and the Lions fell 7-4.

In the rubber match of the series on Friday, Missouri Western cruised past the Lions 8-0 as Lindenwood only had three hits during the day.

Tyler Cassmeyer made the start, lasting six and a third innings allowing eight hits, five runs and one walk and getting two strikeouts.

Following the series loss, Lindenwood drops to 18-20 and will play its next game on April 17 against Central Missouri at 6 p.m. in St. Charles.