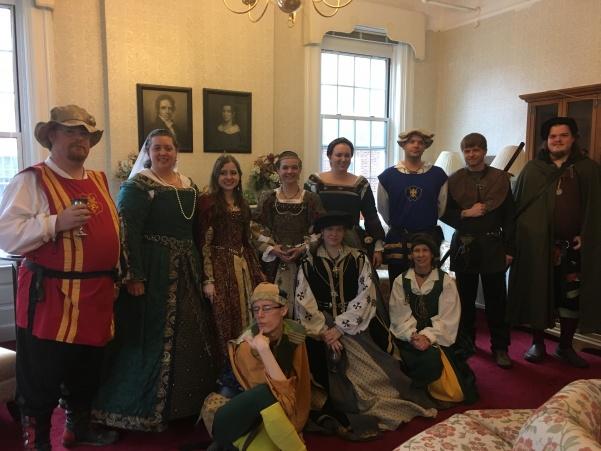 Jacqueline Brown, a community adviser for Sibley Hall by day and an English princess by night, works for the St. Louis Renaissance Festival every fall.

Brown and many of her fellow cast members entertained a room of visitors with activities like acorn whistling and acting a fool.

The actors, who were playing characters ranging from royals to pirates, were all tasked with hand making their costumes when they joined the Faire. Many joined cast after attending the Faire as a visitor, and for most of the cast, this is their first time acting.

“[My friend] gave me free tickets to [the Faire], and I came out every single weekend … then she somehow talked me into joining [the Royal] Court,” Katherine of Aragon, Queen of England, said.

For the Captain of the French Guard, he joined out of his love for history.

“For the longest time I always was a history buff; [I] liked the whole medieval Renaissance era,” he said. “I wanted to keep pushing myself out of my comfort zone.”

The Captain of the French Guard also said he wanted to join the Faire because, as an engineer by day, he wanted to have the opportunity to build siege weapons.

Struggles the Court Jester entertained the room by crowning himself the “Princess of Potatoes.” As the newly crowned princess, he made his first decree “potatoes for all.”

While many of the attendees were residents of Ayres or Sibley Hall, there were some families and young children. Some even dressed the part of Renaissance players themselves.

“I think it’s cool to see everyone in their outfits,” Hope Barnes said. “They’ve gone all the way.” Barnes, a community adviser for Ayres Hall, attended inmMedieval garb that was perfectly fitting for the event.