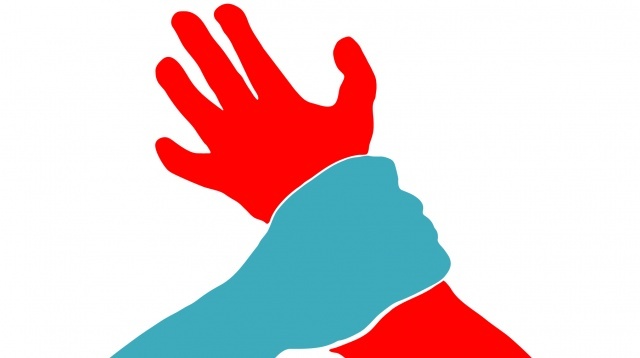 First, her boyfriend made her feel uncomfortable by talking about other girls and how they looked. Later, alumna Viktoria Muench said he cheated on her, called her worthless and said she would never be successful because she is a woman.

“He was a crazy manipulator,” said Muench, who graduated from Lindenwood in 2016. “He recognized where I was vulnerable and used it to make me more vulnerable.”

College students like Muench who find themselves in abusive dating relationships might have a harder time coming to grips with them, said Whitney Mathison, director of the counseling center at Lindenwood.

“Some people have that shame like ‘Well, I’m educated’ or ‘I come from this type of family, how did I not see this coming?’ And it can prevent them from seeking help,” she said.

According to the University of Michigan’s Sexual Assault Prevention and Awareness Center, students may feel isolated from personal support networks and resources because they are away from home for the first time.

Sarah Couch, a staff counselor at Lindenwood’s counseling center, said a lot of domestic violence cases go unreported because victims “might not recognize that it’s abuse.”

“I find that’s really common,” Couch said. “When I first use the term ‘abuse,’ I know it’s a big moment because it’s like ‘that’s what this is?’”

In addition, Mathison said it’s harder for abused men to seek help because of a male-dominated society.

Couch said hearing things such as “man up” or “you’re the man in the relationship, get it together” can discourage men from seeking help.

Many times, the abuser will call their partner names while intoxicated so the victim will blame the alcohol, not the abuser, Couch said. She said victims will make other excuses, like “they are drinking” or even blame themselves for causing the abuse.

“It messes with their head so much, like, ‘Oh, maybe I am making him upset,’ and they’ll question themselves,” Couch said.

Muench said she was living in Blanton Hall and her boyfriend was living across the parking lot in Guffey Hall, so it was hard to get away from him and the emotional abuse.

“It was like a drug that I was addicted to,” Muench said. “I couldn’t find the strength to get away, and he knew that.”

Muench said she talked to her friends about what was happening, but they didn’t know why she wouldn’t leave him.

“They didn’t understand my position,” she said. “If you have never been through it yourself, then you wouldn’t understand.” She said it’s hard to leave the relationship because “you just get so wrapped up in it.”

Couch said victims often go through what is called the cycle of violence.

In the first stage, often known as the honeymoon stage, the abuser portrays himself or herself as ideal and perfect and promises to stop the abusive behavior.

The second stage is the tension stage, where the victim tries to control situations to avoid violence and feels as if she or he is “walking on eggshells,” according to domesticviolence.org.

Lastly, the most violent stage is the explosion stage, where there is abuse. This stage can vary in length and severity.

“Usually, it’s just abuse all the time after some point,” Couch said.

Couch said victims who go to counseling may feel as if they are ready to leave the relationship, but by the next session, they say the abuser has changed.

Sometimes female victims stay because they want to help their abuser because “something is wrong” or “he’s had a really tough life,” she said.

“It’s like they get brainwashed,” Couch said. “Victims are very vulnerable. It takes quite a bit of time for them to leave, and unfortunately, some of them don’t get out of it.”

Because of her abusive relationship, Muench said she had social anxiety. She said that she wanted to stay home and hide because she was embarrassed about who she was and what she looked like.

Muench said she doubted herself every time she celebrated a success. The relationship made her feel like she didn’t deserve anything good in life; she always expected the worst.

Muench said she told her mom and her brother about the abuse but didn’t want to admit how bad it was because they don’t live in the U.S. She didn’t tell her mom about all of it because she “didn’t want to worry her.”

She said she didn’t want to admit that she was in a mess that “I didn’t know how to get out of.”

The starting point of Muench’s healing was when she tried to distance herself from him.

“I was sick of feeling worthless and being held back by this person,” Muench said.

Gaslighting is a common tactic that is used by abusers, according to Couch.

It is “an extremely effective form of emotional abuse, which causes a victim to question their own feelings, instincts and sanity, which gives the abusive partner a lot of power,” according to the National Domestic Violence Hotline.

“They’ll take the truth and twist it and put it back on their partner,” Couch said. “They’ll twist everything during the debate or argument and make the partner feel like they are losing their mind.”

Gaslighting happens gradually over time. The abuser’s actions may seem like a “harmless misunderstanding” at first, but as the abuse continues, it can leave a victim confused, isolated and depressed. This can cause the victim to begin relying on the abuser and creates a difficult situation to escape, according to the hotline.

According to Psychology Today, some of the warning signs of gaslighting include telling blatant lies, denying what was said even though there is proof, using important things to the victim as “ammunition,” throwing in positive reinforcement to confuse the victim and telling the victim that “everyone else is a liar.”

According to the hotline, there are five gaslighting techniques.

Withholding, the first technique, is when the abuser pretends not to understand or refuses to listen.

Countering is when the abuser questions the victim’s memory, even if the victim remembers the events correctly.

Blocking and diverting is when the abuser changes the subject and questions the victim’s thoughts.

Trivializing is when the abuser makes the victim’s needs or feelings seem unimportant.

Lastly, forgetting and denial is when the abuser pretends to forget what happened and denies things, like promises that were made to the victim.

Taylor Ikemeier from Bridgeway Behavioral Health in St. Charles said people who suspect their loved ones are in an abusive relationship should know the resources that are available, believe the victim and not be too “pushy.”

According to the National Domestic Violence Hotline, it takes a victim on average seven times to leave the relationship before finally leaving for good.

Leaving the relationship is the most dangerous time for a victim because the abuser feels as if he or she is losing power. The abuser can act in ways to attempt to regain control over the victim.

Making sure credit cards, money, keys and other important items are put aside in a safe place is something that Couch tells clients to do when they are planning on leaving the relationship.

Outreach services, such as support groups, counseling, staying with a family member, filing an order of protection and utilizing a shelter that has a confidential location, like Bridgeway, are examples of services available to victims.

For Muench, getting away from her abuser was only part of the healing process. The rest came when she completed an in-depth multimedia project, called “Broken Angels,” for her master’s degree, which covered victims of emotional abuse. She said she wanted to use her experience to do something good.

“For me, it was a silver lining,” Muench said. “Maybe it had to happen to me so I could make a difference.”

WHERE CAN I GET HELP?