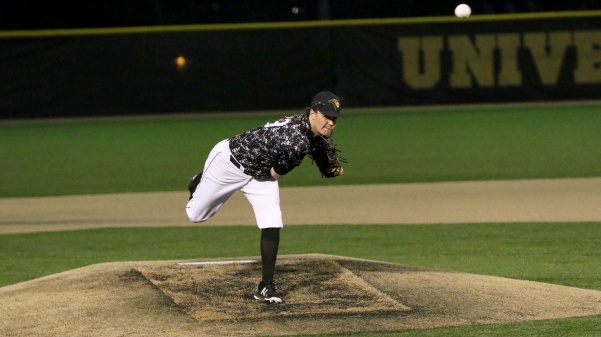 Pitcher Kyle Hentis, No. 13, delivers a pitch in the Lions' 10-2 win over Central Missouri on Tuesday night in St. Charles.
Photo by Kyle Rhine

The Lindenwood baseball team cruised past Central Missouri 10-2 on Tuesday night in St. Charles led by the dominance of Kyle Hentis. Hentis came out of the bullpen and pitched three innings and struck out seven batters for his first save on the season.

Michael Cessna made the start for Lindenwood, lasting four and a third innings. He allowed four hits, two runs and one walk and recorded one strikeout.

After the Mules cut the Lions’ lead to 5-2, the Lions scored a run in the bottom of sixth when Saladino crossed the plate on a wild pitch from Central Missouri’s pitcher.

In the seventh inning, Lindenwood put the game out of reach with four runs coming around to score. Wes Degener scored the first run of the inning on a wild pitch and Behrens followed with a double to left center scoring Drew Quinones and D.J. Miller. A few batters later, Behrens scored on another wild pitch in the inning from the Mules to make it 10-2 Lions.

Following the win, the Lions are 19-20 and will play a series against conference opponent Fort Hays State beginning at 6 p.m. on Friday, April 20, in St. Charles.