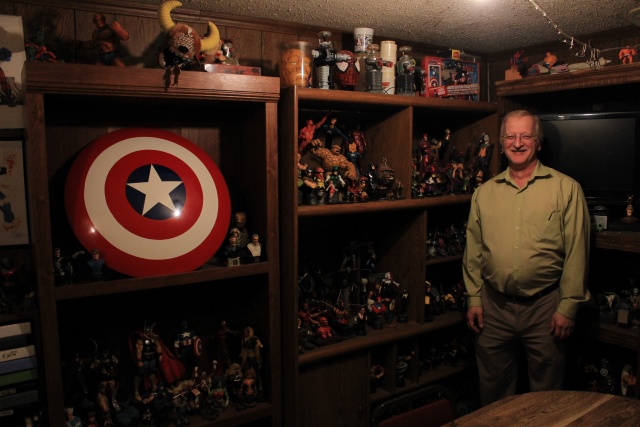 Quiggins transformed the basement of his house into his own “mancave.” It is full of artwork, superhero and comic figurines, as well as an entire room that houses his comic book collection of approximately 50,000 comic books.
Photo by Lindsey Fiala

Assembling pool tables. Digging ditches. Working at a psych ward. Owning a comic book store. Larry Quiggins had all of those jobs before becoming a theater professor, and he applies those experiences in the classroom.

One of Quiggins’ first jobs was as an orderly in Missouri Baptist Hospital’s psych ward.

“I would be the one who was holding them down while they were given electric shock therapy,” he said. “I can tell you that I hated it so much.”

Quiggins got a transfer to the midnight shift where his duties included making sure patients stayed in bed throughout the night.

One patient, a huge guy also named Larry, scared all of the other workers in the ward, even though he had never done anything to hurt anyone, Quiggins said.

“I took [sharing his name] to my advantage, and he became close to me,” he said. “Everyone who didn’t want anything to do with him stayed away from him while I’m walking down the hall with him holding his hand.”

Quiggins said that if the ward hadn’t closed down, he probably would have continued working there.

“It was definitely one of those jobs that has stuck with me, and I learned a lot of things,” he said. “One of these days I will write a play that has to do with one of those experiences.”

Quiggins said one of his hobbies has always been reading and collecting comic books, so after he was laid off from the psych ward in 1990, he decided to open a store.

He went to several banks, trying to get a loan. No one would give him one, though, so he got the money from his father, who also was skeptical of the idea.

Quiggins proved he knew what he was doing, because on the opening day, his shop was packed with customers. He named the store Bug’s Comics and Games, after the nickname he’d had growing up, Bug, which was short for bug eyes.

After opening day, the store stayed popular, and soon many customers became regulars.

Wednesdays, also known as New Comic Book Day, were the busiest days of the week. The shop also hosted a comic book club made up of his regular customers, and they all picked a character from a comic book as their name in the club.

Nick Kelly, now an assistant professor of theater at Lindenwood, was a former manager at Bug’s Comics and Games from 2003 until it closed the next year. He said he has been reading comics for 30 years and loved working with Quiggins. They have been friends since 1997.

“Some of my favorite times were sitting around after hours and talking books until 1 in the morning [with Quiggins],” Kelly said. “If Larry wouldn’t have sold the shop, I would probably still work there one day a week.”

Owning his own comic book store allowed Quiggins to have lunch with one of his biggest idols and play as his other.

At the time, there were only two distributors of comic books, Diamond Comics and Capitol Comics. Since they were competing against each other, they would host seminars once a year.

“Anybody who was anybody that had to do with comics and movies would be at those seminars to talk and rub elbows with us retailers so we would sell their products,” Quiggins said.

At this event, Quiggins was able to have lunch with Stan Lee, his biggest idol in the comic world, comic book writer and previous editor-in-chief for Marvel Comics.

Quiggins walked into the room, and Dick Ayers, an early artist of the Avengers, called Quiggins over to sit with him and his wife for lunch.

During this time, Quiggins also worked for Marvel and made several guest appearances as Spider-Man. He still has the professional costume to prove it.

After working at a convention in 1996 dressed as Spider-Man, Quiggins walked around downtown St. Louis and under the Arch, still in costume.

Quiggins recounts this day as one of the best days of his life because people were constantly running up to him yelling “Look, it’s Spider-Man!” honking at him and yelling from high up in buildings at him.

His favorite moment was when he was at one end of the Arch when he heard a group of Asian men yelling and screaming “Spider-Man!” and running toward him from the other side.

Quiggins said he had a hard time understanding them because of their broken English, but said he still thoroughly enjoyed the experience.

“I heard one of them say to his buddy, ‘I can’t wait until we get back home and tell everybody we met Spider-Man,’ because in their minds I was the real Spider-Man,” he said.

After several years of owning the shop, Quiggins said he became bored and decided to go back to school. He said that being a theater teacher was always his dream job.

Quiggins closed his shop because it was becoming harder to make profit from it, he said, and he did not have as much time for it as he used to.

Sometimes Quiggins misses his store, but he said he still gets his comic fix from the approximately 50,000 books he has in his collection. He said that for as long as he can remember, he cannot go sleep until he has read a comic book.

In the end, though, teaching is what he loves the most. “I’ve had a lot of life experiences that I can share and explain things [to students],” he said.