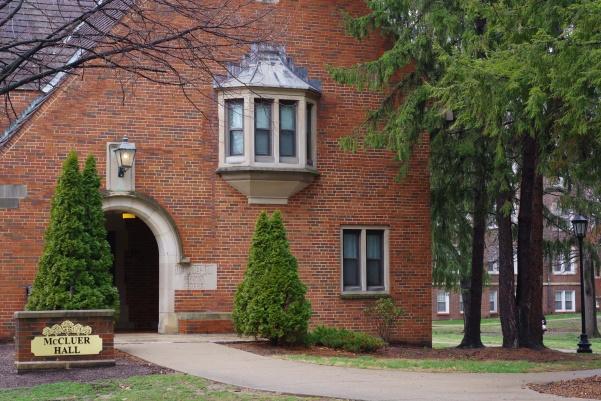 McCluer is just one of many buildings that will undergo changes for fall semester.
Photo by Kat Owens

Spellmann Center, McCluer Hall and Butler Loft will all be undergoing facelifts this summer and major shifts in purpose.

Butler Loft, after a year of inactivity since Grab-N-Go’s closure, will become Lindenwood’s Makerspace, an artist’s center, with a mix of information technology and traditional craft art, according to Art Department Chair John Troy.

In Spellmann, the third floor soon will have offices for Admissions, Academic Affairs, the International Student Center, Business Office and Student Financial Services. Vice President of Operations Diane Moore said it will have a very open, inviting feel, incorporating a lot of glass into the renovations, making Spellmann “the door to the university.”

Currently, all of these offices are spread out across campus: the International Student Affairs office is located in the LARC; Admissions is in the Welcome Center; and Academic Affairs, the Business Office and Student Financial Services reside in Roemer Hall.

Vice President of Enrollment Management Terry Whittum said he is excited for the move to Spellmann because the new space will give prospective students a good first impression and be more convenient for both new and current students.

“The goal is that you’ll be able to go into that one area and do everything from request your transcript to finalize your financial aid,” he said. According to Whittum, Saint Louis, DePaul and Marquette universities all have similar setups. “In. Out. Easy,” Whittum said, snapping to each word.

The renovations will begin after school lets out on May 5 and will be finished by September.

The Makerspace is meant for more than just art majors, as technological advances have created a need for majors in communications, humanities, business, etc., to be educated in artists’ programs.

President Michael Shonrock is “thrilled” about the opportunity, and the university is backing the initiative because it has the potential for a lot of students to use it, Troy said.

The space is ideal because it is very flexible with the ability to host studio classes, to fit equipment (woodshop, printmaking, laser and 3-D printers, ceramic kelms and sewing machines) and dozens of students, Troy said.

“It’s a great location because it’s pretty much in the heart of the academic activity on campus,” he said.

The changes to Butler Loft are part of an initiative to bring back the art department to campus. The department has been moved off campus into Studio West and East since 2008. Troy said because the rent is “pretty astronomical,” the university felt it was time to relocate back on campus.

The department is excited to move back on campus because of convenience and safety for students, since studios are open until 11 p.m. every night.

“Depending on where [students are] coming from, a lot of the times it’s no longer, or even shorter than from Roemer to Scheidegger, but it’s an obstacle to leave campus,” Troy said.

All equipment will be moved out of Studio West and into the Makerspace in August, in time for the fall semester. According to Troy, the university plans by spring of 2019 for all of the art department to be back on campus.

“We’re just very excited about inventing a new chapter of art production and activity on campus,” Troy said. “Connecting the disciplines and connecting the traditional and the technological. This is a trend that a lot of the forward-thinking universities are putting into place, and we’re excited to be on the leading edge of that.”

The changes in Spellmann will cause nine communications faculty members to relocate to McCluer Hall, along with the LUTV newsroom and the journalism lab.

Associate Dean of the School of Arts, Media and Communications Jason Lively said even though some instructional space will be lost and relocated to the LARC, the opportunity to have a converged media space is “a step up from what we have right now.”

Within the new space at McCluer Hall, a podcasting area, broadcasting newsroom with a green screen for LUTV, camera checkout and editor’s office is proposed, Lively said.

“Students’ best interests are at heart, and so even though they may be moving from one place to another, it’s not in any way meant to diminish the education, the experience they’re having,” he said. “If anything, we want to enhance that.”

No classrooms will be located in McCluer Hall. Communications will take up the basement, and humanities faculty will be relocating to the second and third floors from Butler Hall.

“It makes sense to convert McCluer into faculty offices,” Moore said. “They’re designed to be large residential rooms, so the offices will be very nice.”

Moore said the most expensive part of the McCluer renovation will be reviving the 1950s vintage elevator. The budget also will go toward making the building handicap-accessible and enhancing the IT infrastructure.

All updates to the building are expected to be finished by August, she said. Dean of Humanities Michael Whaley said after being in Butler Hall since 2002, he is excited for a change.

McCluer Hall will give his faculty a chance to be closer; they are currently spread between four floors in Butler Hall.

The proposed plan includes shared lunch and meeting places between the communications and humanities faculty. Whaley said he is looking forward to learning more technical skills from communications staff to implement in humanities classes.

“The more we deal with people from other schools, we get more ideas about doing more interactive things,” Whaley said.

Butler Hall will be vacated next year and will go into deferred maintenance, which is the opportunity to complete upkeep that has been postponed in previous years. Currently no plans for Butler Hall’s future are concrete yet, as Moore said she plans to check the structure of the century-old building first.

Currently Moore said she is working with a $10 million budget from the university’s building fund, which is separate from the operating fund tuition supports, to complete all renovations, including those underway at Niccolls Hall.

Moore said her biggest goal is to renovate the older buildings, and “in the process of addressing the deferred maintenance, we have the opportunity to also re-envision the campus and how it can be utilized.” Moore said she doesn’t think the renovations are excessive for a university.

“If you’re not moving forward, if you’re standing still, then you’re not keeping your university current,” she said.