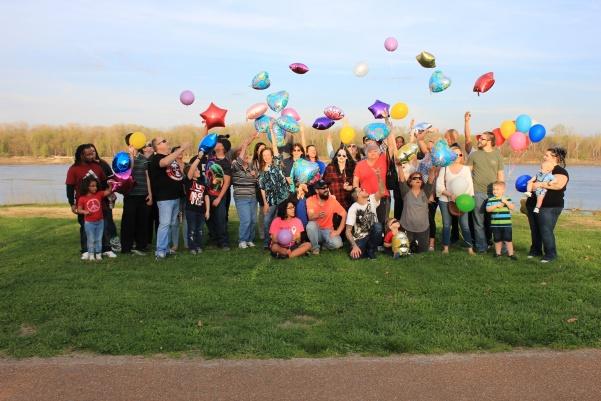 Two-year-old Braxton was excited to be outside with bubbles in hand. His mom, Brittany Pohrer, did not have a chance to pick up her hula-hoop before Braxton began running around in his red sunglasses, Cardinals T-shirt, black jogging pants and sandals.

He, along with his mom, were at Frontier Park, awaiting the multitude of guests to arrive for his aunt Tiffany’s balloon release. Tiffany Sabourin was 13 when she was murdered on Lindenwood’s campus 20 years ago.

The smell of a food truck was in the windy air as the sun started to set opposite the Missouri River. The small crowd of eclectic people grew to over 50. Braxton weaved in and out of the crowd as they were trying to gather for a group photo. Balloons with daisies and “You’re so special” on them were prepared to float in the sky.

Plenty of people attempted to snatch Braxton for a quick hug and photo, but he was too quick. Dawn and Jacob Sabourin, Tiffany’s mom and brother attended, and were one of the few lucky ones to hug him tightly.

The group of people from all over the state began to shuffle closer to the river.

It was balloon release time.

Braxton sat between Jacob and Dawn. He grabbed a balloon with a yellow daisy printed on it, and sat on the grass while everyone else was listening to Jacob about where to stand.

Donna Craig, Tiffany’s best friend, counted to three and Braxton watched as his yellow daisy balloon along with all the other balloons rose in the air and floated over the river. Tears streamed down Dawn and Brittany’s faces. Braxton looked confused until Jacob picked him up and placed him on his shoulders. Jacob pulled Dawn and Brittany in for a hug. They all watched the balloons float away until they were out of sight.

Everyone who knew Tiffany always said she was a happy soul. Braxton seemed to encompass that vibrant personality that Thursday evening as family and friends gathered to remember Tiffany Jaylene Sabourin.