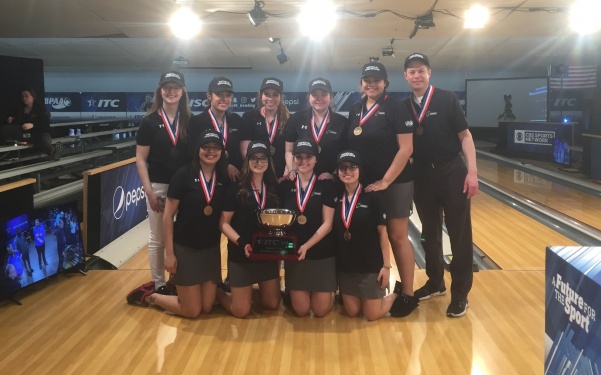 The women's bowling team have won their second intercollegiate team championship since 2006. The championship will air on CBS Sports at 7 p.m. on Thursday.
Photo provided by Phil Vida

The national bowling championship match between Lindenwood and McKendree University will air on CBS Sports this Thursday.

Sixteen teams qualified for nationals, which were then separated into two teams of eight for the championship.

From there, the top four teams from each of the two brackets moves onto the finals.

Held in Lincoln, Nebraska, from April 18 to April 20, Lindenwood eliminated other teams, such as Wichita State, Newman and Delaware.

Merlina San Nicolás, a member of the team and also a reporter for Lindenlink, said in an email that she is “especially proud” that the team performed when they “needed to win a match.”

“We were clutch, and we exceeded all expectations,” she said, “Once we made it to the TV show, we knew we had nothing to lose.”

One thing San Nicolás said she “truly loved” was receiving a lot of support from the bowling community around the St. Louis area as well as Lindenwood alumni.

“It was very special,” San Nicolás said. “I can’t wait to see how we look on TV. It’s definitely very surreal, and I feel very humble to have lived this experience among some of the finest women and athletes in college bowling.”

Head coach Phil Vida said getting to the championship is what “you’re trying to do from the beginning of the season.”

Vida said the team went undefeated in the match play and is proud of how they performed.

For the women’s team, this is the second intercollegiate team championship they have won since 2006, according to Vida.

The 90-minute presentation of the championship begins at 7 p.m. Thursday.