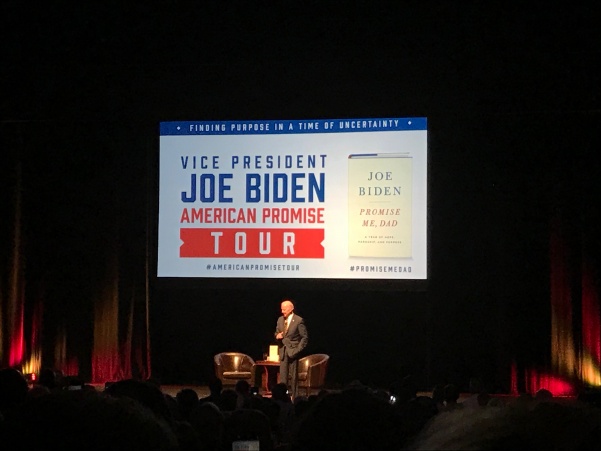 Former Vice President Joe Biden spoke at the Peabody Opera house Thursday night in what was part book tour, part nostalgia and part testing of the waters for a potential presidential campaign in 2020.

Former U.S. Ambassador to Ireland, Kevin O’Malley, introduced Biden by summarizing his accomplishments in Congress and in the Obama administration.

O’Malley said that while in Congress, Biden had the “ability to find compromise and get things done,” such as drafting the 1994 Violence Against Women Act, which was later signed by former President Bill Clinton.

Keeping the introduction light-hearted, O’Malley caused the crowd to erupt into laughter with a comment about the Obama administration.

Structured, purposeful, respectful, respected and a “scandal free eight-year administration” were the words that O’Malley used.

“Those were the good old days,” he said as the crowd gave an ovation.

Moderated by Cincinnati-native author Curtis Sittenfeld, Biden provided background about his new book “Promise Me, Dad. A Year of Hope, Hardship and Purpose,” and gave an inside look into his friendship with former President Barack Obama.

Biden wrote the book to let people know about his son, Beau, who was an Iraq War veteran and former attorney general of Delaware.

Beau Biden died of brain cancer at the age of 46 in May 2015. The former vice president said he wanted people to know what a “remarkable man of honor and duty my son was.”

Joe Biden told a story of how he got to become so close to his sons.

In 1972, Biden’s first wife and Beau’s mother, Neilia, was killed in a crash along with their 1-year-old daughter, Naomi. Beau and his brother Hunter also were in the wreck but made a full recovery from their injuries.

Biden said that while Beau and Hunter were recovering in the hospital, their beds were pushed together, and Beau would always reach out and touch Hunter and tell him he loved him. The boys bonded over the tragedy and loss of their mother and sister, which Biden said later turned into his sons “looking after him.”

Biden said the family had a Thanksgiving tradition of spending the holidays in Nantucket, an island in the state of Massachusettes. The family always did the same things on the same days and went to the same stores. But it was hard, he said, to get everyone to return the first year after Beau died because there was an empty seat. The family carried on and had hope.

The mood in the room lightened as Biden switched gears and talked about his friendship with Obama.

He said they were genuinely close friends and to “set the record straight, he [Obama] made the first friendship bracelet,” which caused the crowd to give yet another ovation.

With Obama, Biden said he trusted him with his life and vice versa. Biden said that Obama gave him presidential authority to work on issues with countries like Iraq and Ukraine. He said he sometimes spoke for Obama because he trusted him to.

As the event began to come to a close, Sittenfeld asked the question that everyone had been waiting for, which concerned running for president.

Biden said that before Beau was diagnosed with brain cancer, he had planned to run. He had a campaign staff and believed that they were very competitive.

As for 2020, Biden said he doesn’t know what he is going to do, but he has until January to make up his mind.