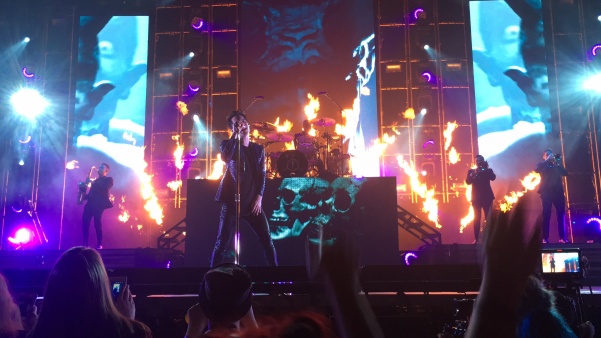 Brendon Urie of Panic! At The Disco in St. Louis on April 5, 2017 at the Enterprise Center on the "Death of a Bachelor" Tour.
Photo by Samantha Kimball

Panic! At The Disco is back with a new album after keeping fans on edge with cryptic messages and pop-up shows around the country.

The album “Pray For The Wicked,” released in June of this year on Fueled By Ramen Records, explores many concepts like religion, hope, failure and success.

The opening track, “(Fuck A) Silver Lining,” is about wanting to set yourself apart from the crowd while also striving to find the best thing (a silver lining) in every situation, no matter how bad it may be.

“Say Amen (Saturday Night)” is one of the songs that has some religious background with lyrics such as “I pray for the wicked on the weekend” and “swear to God, I ain’t ever gonna repent.”

The second lyric mentioned is a wordplay based on repentance, which is the confession of one’s sins with a priest or a minister and involves asking for forgiveness of a wrongdoing, according to the Merriam-Webster dictionary.

The line “swear to God,” is ironic, according to music lyric website Genius because Panic! frontman Brendon Urie is refusing to let go of his sins because it’s “Saturday night,” as he says in the song.

Stepping away from religion, “High Hopes” is a song about literally keeping your hopes high even when it feels like the world is against you. It’s about dreaming big and going after it no matter what it takes.

Coming in strong with the emotions and slowing down quite a bit, “Dying in LA” is the last song on the album.

Featuring a soft piano ballad that reminds listeners of “This Is Gospel,” from Urie’s 2013 album “Too Weird To Live, Too Rare To Die!,” Urie tells the story of a star-struck person who goes to Los Angeles in an attempt to make their dreams come true.

With how sad the instrumental track is, one can only guess that the person’s dreams did not come true and he did not become successful.

According to Genius, the song highlights the journey of a person who flocks to the city and is amazed when he first arrived but is beaten down over time. He slowly loses hope and starts to become the person he swore he would never be.

Filled with energy from beginning to end, “Pray For The Wicked” proves to be just as good as his other albums, as it debuted at No. 1 on the Billboard 200 Albums Chart upon its release.

“Pray For The Wicked” is available in stores and streaming services everywhere.

Leg two of the “Pray For The Wicked Tour” kicks off Jan. 10 of next year in Buffalo, New York.

Tickets and VIP packages are on sale now through Ticketmaster.