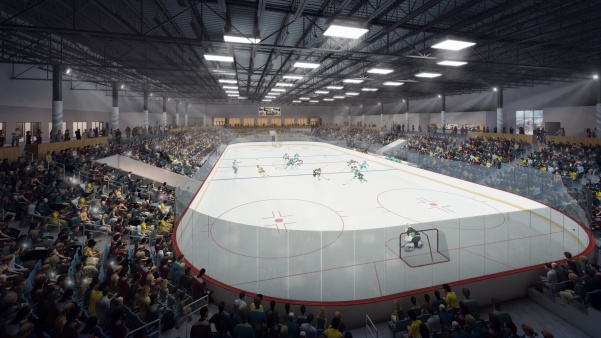 A rendering of the main arena in the ice center, which is projected to open next September
Image courtesy of Generator Studio.

Construction is under way on a 275,000-square-foot ice sports facility that will be the new home arena for Lindenwood’s ice hockey teams when it opens next September.

Currently, the Lions use the aging Lindenwood Ice Arena in Wentzville, Missouri, more than 20 miles west of campus, but they will practice and compete just across the Missouri River when the new building opens.
Out with the Old, in with the New
Construction began on the proposed facility, known as the St. Louis Community Ice Center, after it was approved by the Maryland Heights City Council in late June.  The arena also will be a practice rink for the St. Louis Blues as well as a public rink with space rented by Lindenwood and other teams.

Situated next to Hollywood Casino in Maryland Heights, the $78 million center will have three indoor rinks and one outdoor rink.   It includes a 2,000-seat arena, according to the St. Louis Legacy Ice Foundation, the nonprofit building the center.  The Lindenwood Ice Arena has just two arenas, each with 750 seats.

Coaches and players said the main inconvenience of the old rink is its distance from campus.

“If they’re driving to and from, either in the day or after a game at night, I don’t like our kids being out of the road for that type of distance, so having a facility closer to campus is certainly a big benefit for us,” said Brad Wachler, vice president of Intercollegiate Athletics.

Women’s hockey is one of three NCAA Division I teams at Lindenwood, and almost every team they compete against has a rink on campus.

Concerns about the condition of the nearly 20-year-old rink were raised in January 2017 after a women’s game against Wisconsin, when 18 Lindenwood players and one visiting team member were sent to the hospital for carbon monoxide poisoning.   The university has blamed the event on faulty detectors which allowed emissions from an ice resurfacing machine to reach dangerous levels, though they originally said there were no detectors in the arena.

During the 2013-2014 season, refrigeration issues caused the ice to melt, forcing the teams to practice at the St. Peters Rec-Plex for a few weeks.

Wachler said Lindenwood hopes to sell the old rink after the teams move out in fall 2019, and it will be cheaper to rent space in the new facility than to maintain the current one.   The St. Louis Post-Dispatch reported that Lindenwood will pay $275,000 each year to rent rink space with a capital contribution of $1.5 million.

The ice center will be owned by the city of Maryland Heights, but operated by Legacy Ice.  Gabby Macaluso, assistant to the city administrator, said in an e-mail that the project is a “public-private partnership,” funded in part by $6.5 million from the city, $54 million in local bonds and other funds and tax credits.

During the off-season, the outdoor rink can be converted into an area where the city will host community events, and “approximately 20 concerts” will be put on by the company which owns the Hollywood Casino Ampitheatre each summer, according to Macaluso.

Patrick Quinn, the chairman of Legacy Ice, said that the center will not only benefit Lindenwood and support development in Maryland Heights, but will help support and expand grassroots ice hockey in the St. Louis area.  However, the project had to overcome some obstacles over the past few years.
Long Road to Breaking Ground
In 2017, the possibility of a new rink for the Lions was put in jeopardy by opposition to the facility’s proposed location.  Originally, the ice center was planned to be built on a piece of land in Creve Coeur Lake Memorial Park.  However, local residents objected to construction, saying it would harm the park’s beauty and the environment, according to a change.org petition with 18,000 signatures.

Construction required approval from the National Park Service because parts of the county park were established using federal money, according to the St. Louis Post-Dispatch.  After the NPS denied the construction request, the project was relocated to its current location.

A ground breaking ceremony was held Thursday.  Hundreds of attendees gathered at the construction site next to the casino to celebrate on that sunny morning.  Quinn spoke about the project, along with ex-Blues players Brett Hull and Bernie Federko.

Mike Moeller, the city’s mayor, said at the event that the ice center will draw in 1 million visitors to the area.

Lindenwood President Michael Shonrock and many others took part in the official ground breaking.

Men’s ice hockey coach Rick Zombo was also at the celebration, which he said was an exciting event that allowed him to see old friends from his nearly 30-year involvement with hockey in St. Louis.

Zombo said the Lindenwood Ice Arena served the team well, but the distance from campus was its biggest flaw.  He said moving into the new rink will be a “game changer” because it will allow for higher attendance at games.

“We’re so fortunate that my players have a relationship with the rugby team, and they reciprocate in attendance,” he said.  “We get a college atmosphere just by having the rugby team here. Now, being so close, we would hope that everybody understands that the party’s at the men’s hockey game. “