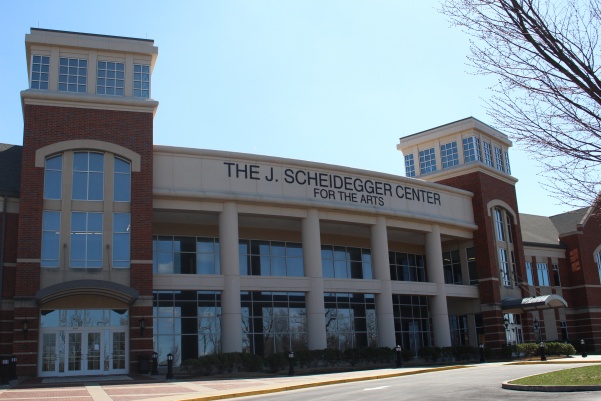 The J. Scheidegger Center For the Arts announces its 2018-19 season.
Photo by Abby Stone.

The J. Scheidegger Center for the Arts has announced its lineup for the 2018-19 season.

Individual show tickets will only be available online beginning at 9 a.m. on July 30. Beginning at 9 a.m. on Aug. 6, tickets may be purchased by calling the box office, according to the announcement.
Sept. 14 – Scotty McCreery
McCreery is one of two artists that were announced earlier this year as a part of Lindenwood’s One Roar Series. McCreery is best known for winning season 10 of American Idol, but in most recent times, he co-wrote all 11 songs on his newest album “Seasons Change.”
Sept. 22 – The Fab Four
The Fab Four pays tribute to The Beatles and is elevated “far above every other Beatles tribute due to their precise attention to detail,” according to the band’s Facebook page. Their “note-for-note renditions” of the Beatles’ songs have audience members believing they are witnessing the real thing.
Oct. 5 – Bill Engvall
Known for his most famous “Here’s Your Sign” act, Bill Engvall was also a member of the Blue Collar Comedy group. He also starred in and produced his own self-titled sitcom on TBS titled “The Bill Engvall Show” which ran for a total of three seasons.
Oct. 13 – Postmodern Jukebox
Postmodern Jukebox was founded by pianist Scott Bradlee in 2011. Bradlee takes pop and rock tunes and transforms them into new versions, turning Miley Cyrus’s “We Can’t Stop” into a ’50s-style doo-wop and Meghan Trainor’s “All About That Bass” into an upright bass fiddle.
Dec. 15 – The Carpenters Christmas Tribute
The Carpenters are known for their “light, airy melodies and meticulously crafted, clean arrangements” that appeal to a wide variety of audience members, according to their Spotify page. The band’s album “Christmas Collection” features 31 popular Christmas songs including “Sleigh Ride,” “Have Yourself A Merry Little Christmas” and “Silent Night.”
Dec. 21 – Celtic Woman: Best of Christmas
Celtic Woman widely celebrates Ireland’s musical and cultural heritage while carrying on its “12-year-legacy” of introducing some of Ireland’s “most talented singers” according to the band’s Spotify page. The band’s albums have been “consistent multi-platinum best-sellers” and its concert tours “touch the hearts of a devoted audience that spans the globe.”
Jan. 26 – Rick Springfield
Most popular for his song “Jesse’s Girl,” which has more than 127 million streams on Spotify, Springfield put out an album earlier this year titled after the popular songs, which includes other fan-favorites such as “I’ve Done Everything For You” and “Love Somebody.”
Feb. 2 – Waka Flocka Flame
Waka Flacka Flame is the second artist for Lindenwood’s One Roar Series. He is the CEO of his own record label, Brick Squad Monopoly, and is an “early influencer of Trap music” according to Spotify. He has worked with other artists such as Roscoe Dash and Kebo Gotti.
March 22 – Patti LaBelle
Known as a “soul diva,” Patti LaBelle holds one of the longest careers in contemporary music, according to Spotify. LaBelle’s most popular song to-date is “Lady Marmalade,” which has more than 14 million streams on Spotify.
May 11 – Patti LuPone
Patti LuPone won two Tony Awards – one for her role of Eva Peron in the movie “Evita,” and the other in 2008 for her role of Gypsy Rose Lee in the revival of the movie “Gypsy.” While doing this, she maintained a highly successful career as a musical theater star. Her most recent album is from 2015 and is titled “Matters of the Heart.”
May 18 – Trace Adkins
This country star has more than 1 million monthly listeners on Spotify, sold more than 11 million albums and has had more than 20 singles appear on charts during his career. Some of his most popular songs include “You’re Gonna Miss This,” “Ladies Love Country Boys,” and “Honky Tonk Badonkadonk.”