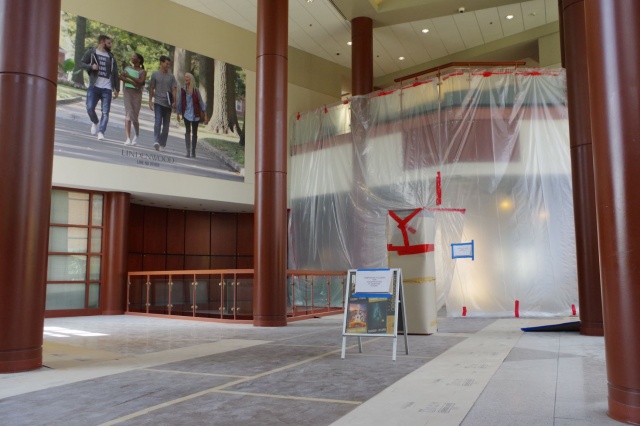 Spellmann Center is still under construction. According to Tim Crutchley the building should be done on Oct 1.
Photo by Kat Owens

Students returning to campus this August should be aware of ongoing building construction and changes to office locations.

Spellmann Center is the only building still under construction. All of the following offices and services are slated to move to Spellmann when it is finished, according to Diane Moore. For the beginning of the fall semester, admissions offices will remain in the Welcome Center. The Business Office, Academic Affairs and Student Financial Services still reside in Roemer Hall. The International Student Affairs Office has been relocated temporarily to the bottom floor of the Welcome Center until the move to Spellmann.

According to Tim Crutchley, associate vice president of Operations, Spellmann renovations should be finished by Oct. 1.

“By the beginning of September, we should be significantly into laying carpet, painting, those types of things, so there may be some noise disruption here and there, but it should be fairly limited,” he said.

Title IX Coordinator Kelly Moyich is no longer is Spellmann. Moyich’s office is now in the LARC 225.

Instructional spaces lost from Spellmann’s second-floor renovation are being moved to the LARC. However, the Digital and Web Design lab, Virtual Reality Lab, Anheuser-Busch Leadership Room, Public Safety and Security Office and five classrooms are still on the fourth floor of Spellmann.

Spellmann’s fourth floor is currently functional, but because of construction it cannot be reached using the staircases from the third floor.

The space replaces both Studio East and West, which are closed. All former studio art spaces are located on campus now. The drawing studio that was in Studio West is on the second floor of Roemer Hall. The painting studios are in the loft area of Butler Loft.

No projectors will be in the Makerspace. Instead, TVs have been installed as well as on mobile carts because of the large amount of natural light in the building.

Studio Art professor Joe Weber, who wrote the initial proposal for the Makerspace, spent the summer preparing the facility. He said he anticipates the studio space will continue to evolve and change, but he is excited that all equipment is in one space so it will get more usage.

“It’s an infinitely better atmosphere,” he said. “It is more conducive to collaboration – not just for art students, but for all Lindenwood students.”

Studio Art professor John Troy is currently looking for a space to relocate the Hendren Gallery that was formerly located in Studio West.

The hours will remain the same for the Makerspace as they were in Studio East and West.

Niccolls Hall opened up for residents this semester as the first dorm to house only fraternity members.

Butler Library will continue to be closed this semester, and no reopening date has been set, according to Crutchley.

McCluer Hall has transitioned to an academic building from a dorm.  All humanities professors moved out of Butler Hall, which will remain offline this school year for updates that need to be completed. Their offices are now on the first and second floors of McCluer. Arts and Communications faculty who had offices in Spellmann moved either to McCluer, the LARC or Scheidegger.

Cinema Arts professor Andrew Millians’ office is in Scheidegger. Dean of Communications Joe Alsobrook and his assistant Alexis Oberdieck are both in McCluer. The full list of Humanities, Arts and Communications faculty offices locations are listed below.

All Arts, Media and Communications faculty are on the bottom floor of McCluer.

The LUTV classroom and the Journalism Lab, where Lindenlink.com is staffed, is also located in the basement of McCluer Hall.

Air conditioning was added to the Field House, which has never had AC in its existence.

Hunter Stadium’s turf field and Hyland Arena’s court also were resurfaced over the summer. Vice President for Intercollegiate Athletics Brad Wachler said the main reason for the renovations to Hyland and Hunter was health and safety.  He said the turf was in “very poor condition” and needed to be replaced, and the court in Hyland was resurfaced to keep the floor even and add in new lines to keep up to date with NCAA regulations.

Matt Hampton contributed to this story.

Click on the photos below for a  full list of Humanities, Arts and Communications faculty offices for 2018: