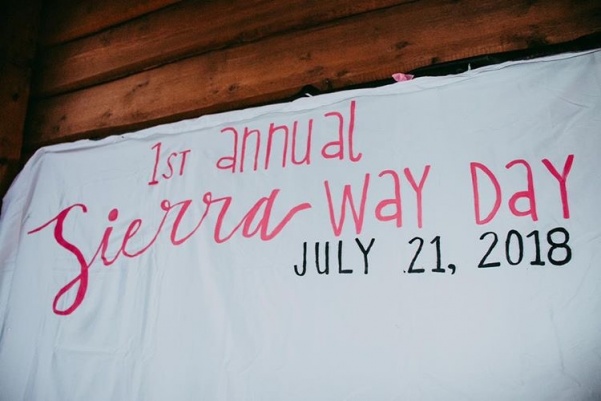 The 1st annual Sierra Way Day was celebrated on July 21 at Redemption Ranch in Foley, Missouri. Photo by Abby Erickson.

Lindenwood student Sierra Wilder died in an auto crash near her hometown of Foley, Missouri, a year ago, but a foundation is keeping her memory alive.

Wilder was an active member of Delta Zeta sorority on campus, and she had just completed her freshman year as a public health major when the accident occurred July 15. She was 19.

Her family set up The Sierra Way Foundation to “use the lessons that Sierra taught us to build people, families and community,” as stated on their Facebook page.

On July 21, the foundation held its first “Sierra Way Day” to raise money for the nonprofit. Barbecue, drinks and snow cones were available for purchase as were Sierra t-shirts, koozies, cups and wristbands. The event also had a silent auction, raffle, free bounce houses, face painting, popcorn, and balloon animals. The mayor of the city of Winfield, Ryan Ruckel, also declared July 21 the official “Sierra Way Day.”

The event raised $11,558 which was “way above our expectations,” said Wilder’s mother, Shanna Shipley Wilder.

“It’s hard to say how many people were there since it was a nine-hour event, but there were a steady 500 people there all day long,” Wilder said in a message.

The family plans on holding another fundraiser in the fall, but also wants to do community events to help the family out.

“The goal is to do scholarships [for] schools Sierra was involved in, a scholarship to her dance studio in her name, give back to organizations, animal shelters, and to people in need,” Wilder said. “She was an extraordinary young lady that had a heart of gold and loved to give! This is our way of keeping her memory alive!”

The Omicron Omicron chapter of Delta Zeta at Lindenwood is an avid supporter of the foundation and is doing its part to celebrate the life of Sierra by making a $500 donation to the Delta Zeta Foundation in her name.

“[Sierra] was an amazing member of DZ,” Delta Zeta president Chloe Freihofer said. “She was adored by so many women and [was] truly an inspiration to all.”

The Sierra Way Foundation’s mission holds true to the life of Sierra: “to put others before yourself, even when they don’t deserve it. To always make time for friends and family. To never give up no matter how hard things get. And to live our lives every day in a way that inspires others to do the same.”

Her family hopes that everyone can learn to live “the Sierra way.”