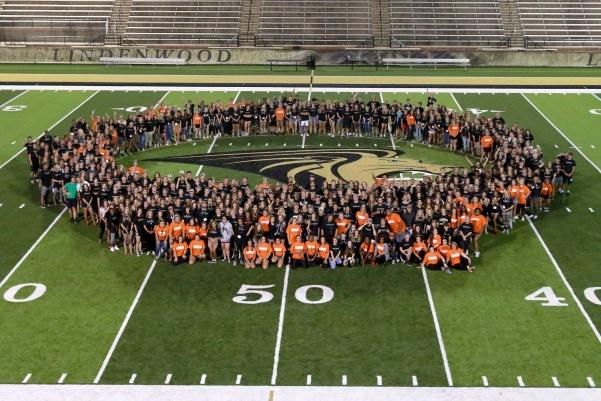 In black shirts, freshmen pose for a class photos with their Lion Leaders, wearing orange shirts, sprinkled in the crowd at Playfair on Thursday night.
Photo used with permission from Angie Royal.

Lion Leaders get pumped to welcome freshmen students to Playfair, an event that uses games and activities to have students meet new each other.

More than 675 students participated in everything from a bonfire to an ice cream social during New Student Orientation this past week.

A majority of the students were freshmen, but a small amount were also transfer students.

Over the course of five days, Student and Academic Support Services, Housing and Residential Life, Student Involvement, the administration and several other departments contributed to hosting more than 20 events.

The events included the traditional Playfair, Block Party, bonfire and NSO Unlocked, but also incorporated new events such as a “Minute To Win It” themed scavenger hunt, Academic Deans Welcome and a Diversity Ice Cream Social.

Director of First Year Programs Sarah Leassner said the orientation was a collaborative effort and the participants were more present than in past years.

“The common theme was they showed up, and they were active,” she said. “From the group sessions to the social events, there was a feeling of ‘this class is all in.'”

Sophomore Jordan Peters, who was a Lion Leader, said she really loved the experience because it pushed her out of her comfort zone.

“I remember when I was a freshmen I was so nervous and scared,” she said. “My Lion Leaders really made me feel welcomed, so I wanted to be that for someone else.”

After the last day of orientation, Peters said she asked for all of her students phone numbers and snapchats in her group.

Freshman Nohea Uluave said she was not even expecting an orientation, but after going through this week she is more excited for school.

“All the games and events gave a glimpse of how our freshmen year could be if we went out and did all the activities,” she said.

The best advice Uluave said her Lion Leaders gave her was “this year depends on us and how we make it.”