New podcasting studios give students opportunity to create own show 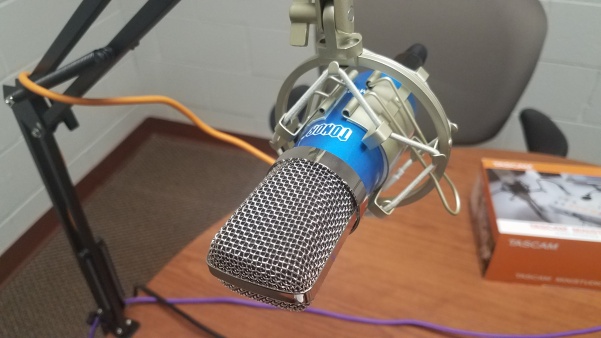 Associate professor of mass communications Richard Reighard, who has spent more than 30 years in the studios of KCLC, Lindenwood’s radio station, said podcasts are “the wave of the future.”

“It’s a whole field that we’ve been kind of ignoring, and it’s about time we start getting with the program and building facilities,” he said.

In 2018, National Public Radio, known for its podcasts such as “Planet Money” and “All Things Considered,” reached an average of 30 million listeners a week.

For comparison, a typical weekly NFL game for the 2017 season attracted 14.9 million viewers.

Corey Layton, marketing director for Whooshkaa, an audio content company, wrote in an AdAge article that “after little more than a decade of experimentation and maturation, podcasting has hit its stride.”

The addition of the round table rooms makes collaboration — from co-hosting shows to inviting guests to speak — easier. One room is finished, and the other should open this month.

This will bring the number of podcasting rooms on campus to six. Two production studios are housed in KCLC Studios with two microphones per room. The other two mini studios are in the Library and Academic Resource Center Media Lab, with one microphone per room.

All studios are available to students, but KCLC studios must be used for academic purposes, according to Chad Briesacher, director of radio operations at KCLC. Educational purposes include: class assignments, student media or career and resume building.

Currently Reighard and Briesacher are using their personal equipment in the round-table rooms to test popularity before requesting university funds for new equipment.

Reighard said the podcast facilities are needed to help students create opportunities for themselves.

Senior Scott Mandziara, a mass communications broadcast major, has been hosting “The Go Around,” a professional sports podcast for two and a half years. Both Mandziara and his co-host, senior Andrew Rogers work for ESPN now.

“The Go Around” covers college football, NFL, NHL, MLB, March Madness and any national hot topics for sports. Mandziara and Rogers also co-host “Inside the Den,” every Monday from 7 to 8 p.m. which covers Lindenwood athletics.

“[Podcasts have] made me a better radio host, it’s made me understand sports talk radio a lot more and all the functions that go into a broadcast,” he said. “It has helped me with booking guests for our show and being consistent with something and putting hard work into it.”

Mandziara has invited athletes from Lindenwood and 101ESPN Sportscaster Randy Karraker to be guests on “The Go Around” and “Inside the Den.”

The flexibility and convenience of the KCLC studios have allowed Mandziara to emulate what he has learned from other sportscasters at 101ESPN.  Mandziara said his confidence as a host has grown tremendously and now he is a fill-in producer at 101ESPN, getting the opportunity to talk in regular segments while still in college.

“I am doing something outside of [101ESPN] to make myself better on their airwaves,” he said. “If I don’t do that, and I don’t practice… [I’m] never going to get better.”

Through Mandziara’s two podcasts he has learned to be more decisive, to target and appease audiences, stay interesting and on topic as a host.

“I think it’s awesome they’re taking the initiative here to add something that is going to provide a lot of value to kids who want to do sports talk radio or any kind of podcasting in general,” he said.

Reighard said the university will be adding video cameras and lighting to at least one of the rooms by the end of spring semester. Another plan is to teach students how to market and get more listenership.

In the past Reighard said he had to turn down students wanting to create original content because KCLC is a 50,000-watt station and has strict programming. Now podcasts provide more flexibility with programming and on platforms like apps, laptops and smartphones.

The Media Lab is also planning to sponsor a podcast about video games but wants the initiative to be student-run.

“We want to do interviews with game designers, game design companies, instructors and students about these topics,” Shay Hearn, the Media Lab’s intern, wrote in an email.  “We will also be doing debate segments and a news segment on new tech and games in our fields.”