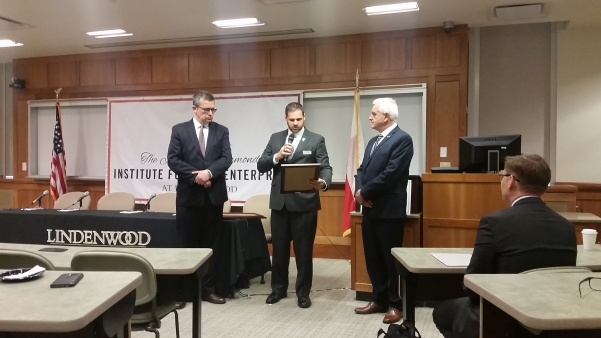 The distance between Missouri and Poland seemed to get a little closer this month when the honorary consul of the Republic of Poland hosted the Polish ambassador at Lindenwood University.

Wojciech Golik, a Lindenwood mathematics professor, was appointed the honorary consul of Poland in St. Louis on Feb. 26. Golik, who is from Poland, came to the United States to pursue his doctoral studies at New Mexico State University in 1983. He earned his degree five years later, then took a job at the University of Missouri — St. Louis.

He moved to Lindenwood in 2001, and after his children grew up, he said he was ready to do something in addition to teaching.

A few years ago, one of his friends called to ask if he would be interested in becoming a candidate for the honorary consul position after the previous consul retired.

With encouragement from his wife, Golik applied. After a year and a half process, along with getting approved by both the U.S. and Polish governments, Golik was appointed.

The St. Louis Consular Corps was founded in 1950. Golik is one of nearly 25 honorary consul members in the St. Louis metro area. Other countries represented include Austria, Finland, Italy, Japan and Sweden.

“There are 2.5 million people [in the St. Louis metro area] of various ethnic origins, some of them are like me and were born elsewhere in a different county,” Golik said. “Others are first or second generation. Sometimes they turn 50, and they want to rediscover their roots and visit their country. It is useful for these people to have someone in the metro area to basically get them this information and connect them to other things.”

Golik is not compensated for his consul work, but he said he enjoys helping Polish citizens when they come to visit St. Louis or assisting Americans who have ancestry within Poland.

“It is very satisfying because I love working for Lindenwood and working with students,” Golik said. “It’s the same way with my other job when I help other people who are American citizens who have some ties in Poland and try to help them solve their own problems or Polish citizens who are visiting here and run into trouble.”

According to the Missouri Division of the Polish American Congress, Golik’s responsibilities as consul include further developing relations between Poland and the U.S., providing help and protection of Polish and Polish American citizens’ rights and protecting the rights and interests of Poland in the United States.

Golik invited Polish Ambassador Piotr Wilczek to speak at Dunseth Auditorium because Wilczek was scheduled to be the main speaker and U.S. guest of honor at Golik’s honorary consul reception in downtown St. Louis.

“It was a big deal [when he agreed],” Golik said. “It’s not every day that ambassadors come to St. Louis, and I was completely delighted.”

With the help of the Hammond Institute for Free Enterprise and the Missouri Chamber of Commerce, Wilczek came to Lindenwood on Aug. 17 to talk with legislators, business leaders and members of the local community about investment and trade opportunities between Poland and Missouri.

“We wanted to connect Missouri and Poland through smaller companies who do not have an international division to market, but they want to sell their product and have a bigger export,” Golik said. “I think it was a win-win situation.”

As the talk ended, both Wilczek and Golik were presented with certificates of recognition from State Rep. Kurt Bahr “for organizing the event and bringing people together to talk and connect,” Golik said.

Neither men expected the certificates, Golik said, but both were deeply honored to receive them.