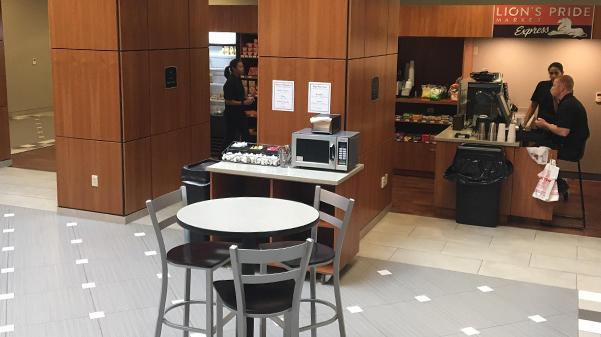 The Lion's Pride Market Express in Harmon Hall is one location where dining dollars can be spent. A decision by the athletics department requires student athletes to use the meal plan with 19 block meals a week and 50 dining dollars a semester.
File photo by Nick Feakes

Beginning this semester, Lindenwood student-athletes are only allowed to choose the “Traditional 19” meal plan.

The traditional plan includes 19 meals per week, which can only be redeemed during certain hours, plus 50 dining dollars. Other resident meal plans offer more dining dollars and 100 or 150 total meals per semester.

The athletic department made the decision based on feedback from athletes and coaches, Associate Athletic Director Betsy Feutz said in an email.

“This option allows missed meals due to practice or competition to be replaced with team pack-out meals or additional food items to support the athletes and programs,” she added.

But Caring De Freitas, a women’s rugby player from Caracas, Venezuela, said athletes want the ability to choose other meal plans because they also include meals that they can take on the road.

“I understand they want to narrow it down, but there should be other options,” said De Freitas, a junior.

Although she lives in a dorm and has always gotten the “Traditional 19” meal plan, De Freitas said the change restricts students in houses who would prefer to spend dining dollars in the Spellmann Lion’s Pride Market and eat at home.

“Instead of using dining dollars and eating in their houses and eating healthier, they have to pay for something they don’t want to eat,” she said.

According to Feutz, Lindenwood allowed athletes to choose any meal plan during the 2017-2018 school year, but in previous years the current policy was in place.

Dining dollars can be spent on food and other items at the Lion’s Pride Market and other campus locations, to buy food outside of meal hours or to add food on to a block meal. The “Flexible” plan includes 150 dining dollars and “Most Flexible” includes $350.