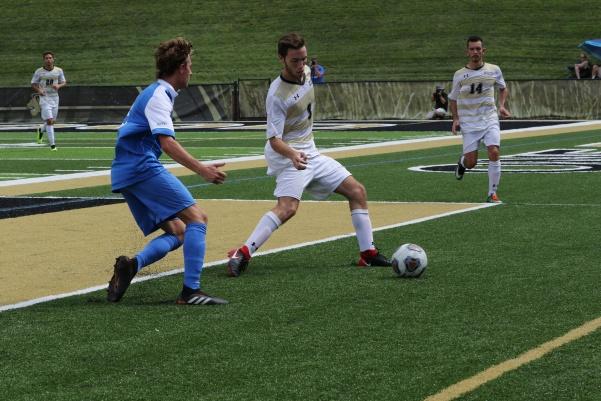 Following a victory in its first game, Lindenwood’s soccer team lost to Rockhurst 1-0 Tuesday after an early goal and dominant performance by the Hawks.

“We knew that this was an important game because we wanted to start the season off right,” junior Andrei Ciot said. “We had two results that were scrappy, both went to overtime, we knew we were tired and that this was going to be a hard game, but unfortunately we didn’t come out with the win.”

Just over three minutes into the match, Rockhurst’s Italian defender Filippo Santandrea got loose from a Lions defender off a corner and headed in the early go-ahead goal. It was Santandrea’s first goal of the season.

The opening 10 minutes of the contest primarily consisted of corner, after corner, after corner. Each team’s best opportunities continued to be produced from the corner flag, as the Lions followed up the Hawks’ goal with a great chance through defender Ciot, who sent a header just wide of the post on a set piece.

Still trailing by one after 20 minutes, the Lions were failing to create any true danger from open play. A water break with 23:23 left to go in the first half gave Lindenwood a chance to briefly rest as well as find out what had gone wrong in the early minutes of play.

“[I told the team to] just keep going and to try to compose yourself and stick with the game plan,” head coach Carl Hutter said. “Keep moving the ball fast and play with urgency, and just keep composing the ball and looking for your opportunities.”

Right out of the break, however, it was the Hawks that generated the pressure on goal. Senior Gianluca Bottoni cut his way past a Lion defender to place the ball on his right foot, where he sent a rocket towards goal, which was saved in highlight-reel fashion by the left palm of goalkeeper Tim Licht.

In his second attempt to end up on Sportscenter’s Top 10 Plays List, Licht made a diving save with his left thigh to shut down Rockhurst’s attacker Dylan Brown on the break with just five minutes before the halftime whistle. His two flashy saves kept the Lions in the match at the half, trailing by just one goal to the Hawks.

“Tim played good,” Hutter said. “He got a little bit shaky in the second half, but he made some really good saves.”

It took just seven minutes for Rockhurst to have another clear goal-scoring opportunity. After a Lindenwood turnover in the back, freshman Noah Mabry had his chance to beat Licht, but yet again the junior keeper came up big for the Lions to keep them down by one. This would be his last big save of the game, however, as senior Aleksa Nenadic replaced Licht with 30 minutes left in the second half.

The biggest issue for the Lions through 70 minutes was their inability to put away their chances in front of Rockhurst’s Peter Baker. With 26 minutes left in the second half, Lindenwood’s defender Gaspar Alvarez got free at the far post but sent his header just over the crossbar. The hosts’ struggles to find the back of the net continued through the final whistle, leading to their defeat by the Hawks by a score of 1-0.

Forward Pape Ndiaye, a senior, said “getting the ball up to the attacking players” was the team’s biggest challenge in trying to break through Rockhurst’s defense.

“I think they came here ready for our long balls, so in-game we had to change our tactics and our movements,” he added.

Lindenwood’s first loss of the season was its first in meaningful play since Oct. 29, 2017, against Fort Hays State, which was also the last time in which the team was shutout. Now with an even 1-1-1 record, the Lions will turn their attention to a Friday night date with the Maryville Saints.