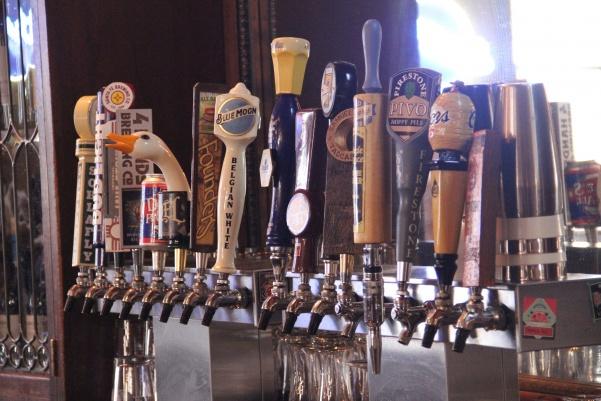 Taps at Llywelyn's Pub, a bar on the corner of Jefferson and North Main Street.
Photo by Jacob Weinrich.

A controversial bill to regulate liquor sales with the goal of reducing alcohol-induced crime was amended at the St. Charles City Council meeting Tuesday.

The vote on the proposal, which some said would hurt locally owned bars, was moved to Sept. 18 because of the changes, said its sponsor, City Councilman Dave Beckering.

The bill requires bars to earn at least half their revenue from food if they are located on North Main Street, a district less than two miles from Lindenwood’s campus that is a popular drinking spot for students.  Existing law places the required food sales minimum at either half of total revenue or $200,000.

The changes made Tuesday allow catered and delivered food to be counted toward the quota. The new version also changed the food sales requirement to come into effect at the beginning of 2019, rather than as soon as it was signed.

The bill also establishes a system that penalizes bar owners for 29 infractions of various severity, including underage drinking, health code violations, exceeding the occupancy limit and allowing customers to leave with an open drink.  If a licensee accrues too many points, they could be shut down.

Beckering said the points system was not modified Tuesday.

The system would govern the whole city, but some North Main bar owners argue it is ambiguous and could punish them for things out of their control.

“At 4 in the afternoon, I don’t have security at every door, so [open container law violations] can be a little hard to control,” said Eric Sohn, manager of Quintessential Dining and Nightlife, a bar on Main.

Sohn also criticized the law for punishing owners if there is a fight at their bar, saying they can do little to prevent altercations other than kicking patrons out once a fight has already started.

The other major change to the bill is to allow the city Finance Department to require licensees to hire a certified public accountant to audit their expenses.  Beckering said this was done to ensure the businesses were audited accurately.

Beckering said one bar owner was at the meeting Tuesday to protest the bill, but other citizens voiced their support.

Sohn was not at the meeting, but he said other bars may struggle to meet the 50 percent food sales quota.

He said bar owners have suggested alternatives for the city to keep the area safe and orderly by taxing bars to fund public safety and cover property damage, but the council has not listened.

“I can’t walk around with a cup and be like, ‘Hey, we need taxes from everybody,'” he said. “We can’t impose a tax on ourselves.”

A year ago this week, a drunken brawl erupted at a wedding party on Main which resulted in two people being hospitalized.  A stabbing victim was found lying in a parking lot in freezing weather on Main, the St. Louis Post-Dispatch reported in December.

In response to these and other isolated crimes, the police stepped up enforcement efforts on North Main in 2018.  Besides patrolling the street, officers also monitor alcohol vendors in St. Charles with the goal of preventing underage drinking and reducing the number of overcrowded bars and over-intoxicated patrons.

Attempts to curb the problem with new liquor laws have gone back several months.  A proposal in May would have banned alcohol sales on North Main after 11 p.m., but it received strong opposition and was not passed.

Sohn said he will be at the next meeting, at which he expects the latest version will be passed.

The full text of Bill 12622 with the proposed changes.  The law would place new regulations on liquor licenses in St. Charles and require North Main establishments to earn half their revenue from food.  It is scheduled to be voted on later this month.

Editor’s note: The feature photo on this story was shot by Jacob Weinrich. It was incorrectly attributed to another photographer.